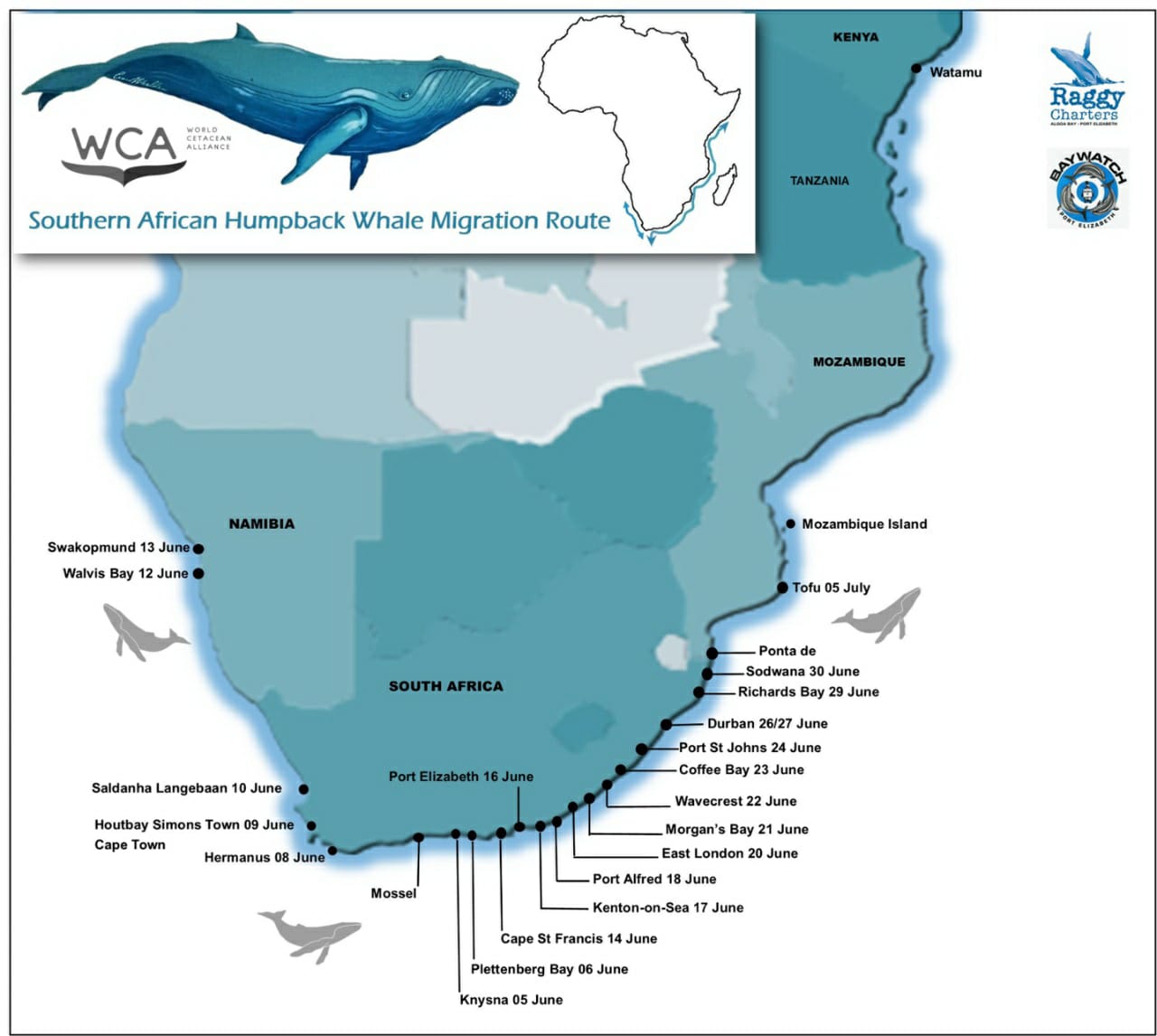 According to the late legendary whale and dolphin researcher, Professor Peter Best, the “Northern migration of Humpback whales seems to reach the African coastline in the vicinity of Knysna”. It is obvious that this is the perfect place to start celebrating the arrival of these magnificent creatures. 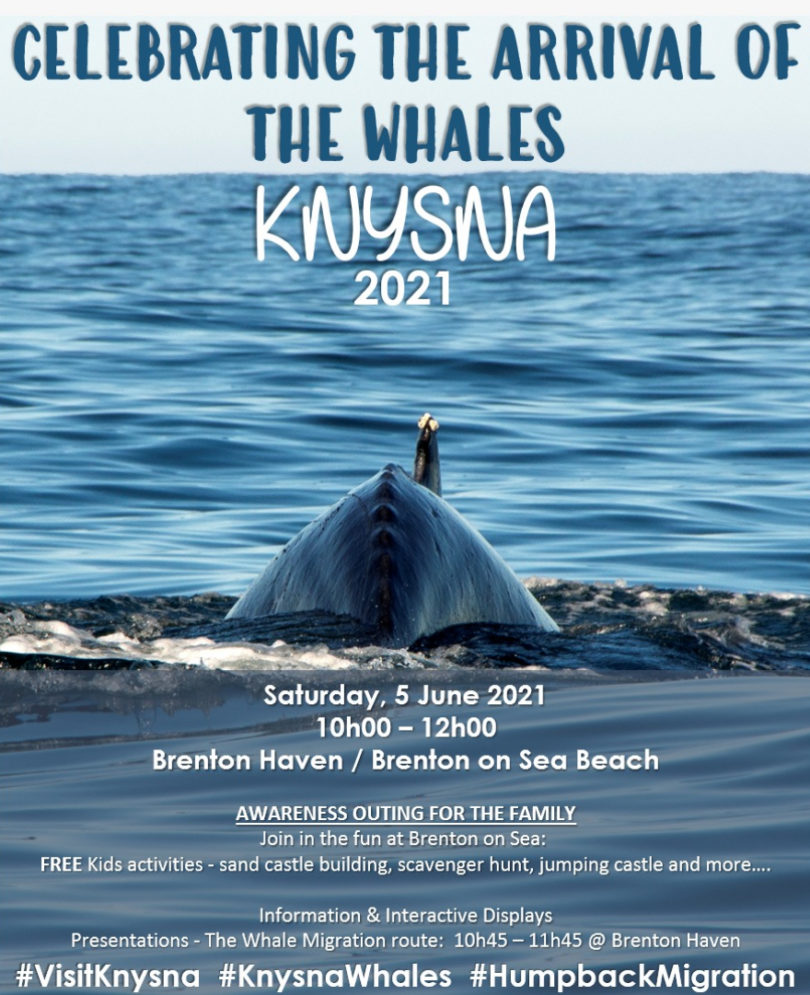 The first event kicks off in Knysna on Saturday, the 5th June 2021 and the ensuing 24 events carry on all the way to Swakopmund on the West coast and Kenya on the East coast. The longest migration of any mammal echoes the longest whale heritage route celebrated on the planet. The route is a joint venture between the World Cetacean Alliance and Raggy Charters and other whale enthusiasts and groups along the African coastline.

These whales were brought back from the brink of extinction in the 1960s, when modern day whaling almost wiped out the entire population, along with all the other great whales. A paradigm shift stopped the slaughter and the humpback whales have led the recovery. They are the first of the great whales to reach their pre-exploitation numbers.  We need to defend these gains and extend them to the other 80 plus species of cetaceans.

Their message to our planet is short and sweet, leave us alone and nature will take its course. They are an inspiration to help us sort out so many of our other pressing problems, like climate change and the polluting and raping of our oceans. Let us join these creatures and do our bit to make our oceans become a better place for everyone.

As these animals move up the coastline, we celebrate their arrival in the towns and cities along the way. Some of the venues will have full blown festivals, while others will simply host a presentation. Every year more venues are added to the route and the activities are expanded. The events are open to the public and the youth are especially encouraged to come along and learn about these animals. Education is the key to their survival.

The humpbacks face many dangers along their migration routes. The biggest natural threat to them is from marauding killer whales. Newly born calves and sub adults are the most at risk . . . but this has been going on alongside their evolution and relatively few animals succumb.  Ship strikes, marine pollution, noise pollution and lack of food caused by climate change are the man-made problems. The chief problem encountered by these whales the world over, is entanglement in fishing gear and especially ropes. It causes these animals to die a slow and agonising death. It is for this reason that we have drawn up a petition to the Minister, to ensure that the fishing industry puts more mitigation measures in place, to prevent these entanglements from occurring. Marine scientists have developed technology that just needs to be implemented. If we all work together, we can make this happen. Please distribute this petition as widely as possible.

Knysna’s awareness and family outing which is open to the public takes place from 10h00 – 12h00 on Saturday, 5 June at Brenton-on-Sea.  Children’s activities will be on the beach with the SANParks and their Honorary Rangers, whilst educational table displays, and posters will be on the grassed area in front of Brenton Haven.

Presentations will begin at 10h45 to 11h45, with SANParks marine biologist, Kyle Smith speaking about the biodiversity and importance of the Knysna Estuary; this will be followed by Lloyd Edwards of Raggy Charters, initiator of this ‘festival’, presenting on the southern hemisphere’s humpback whale migration route.  Here, one lucky attendee can win a whale watching experience with local accredited operator, Ocean Odyssey.

The local awareness programme will end with an evening function hosted by Brenton Haven, where a limited number of interested and like-minded locals and visitors will mingle over a glass of wine and canapés to discuss the benefits of environmental awareness and tourism to and for the greater Knysna area.

For more information on humpback whales and the migration route please see the Raggy Charters website at https://www.raggycharters.co.za/page/southern-hemisphere-humpback-whale-migration-route-shhwmr 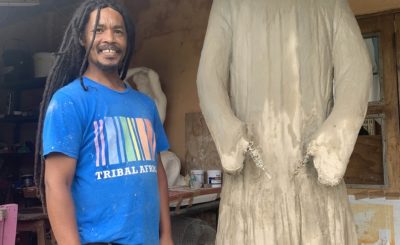 The Knysna Interactive Project: “We came, we saw, we loved.” 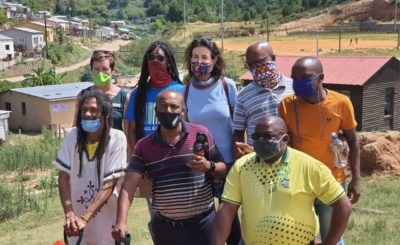 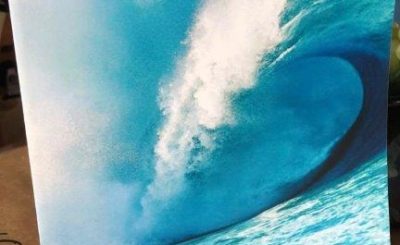