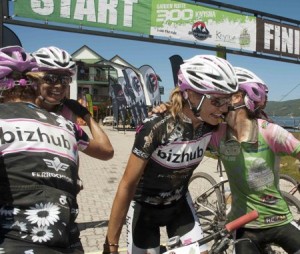 Team Craft’s Adrian Enthoven and Delaney Impey showed their class when they took the Queen stage and overall lead in the Garden Route Rocky Mountain 300 mountain bike race in Knysna on Saturday.

Impey and last year’s runner-up Enthoven won the 115-kilometre second stage in 4:50:09 to claim the overall lead in 9:17:16, which puts them eight minutes clear of their closest challengers.

Team Cycle Lab’s Shan Wilson and Willie Engelbrecht finished in 5:09:02 to take fourth on the stage, dropping them to third overall.

The race broke up fairly quickly after a brisk start by overnight leaders Cooper and Haley on the Knysna lagoon’s western head.

“The youngsters went really hard on those first few climbs up Featherbed Nature Reserve but we managed to hang in there,” said 42-year-old Enthoven. “Our plan was just to sit with them for the first three hours but they struggled on the sandy section and we opened up a gap of maybe 30 or 40 seconds.”

The Johannesburg-based masters’ pairing, riding in their first race together, then put their heads down on the Seven Passes section to stretch out their lead.

Defending champion Cooper said he and Haley decided to ride at their own pace rather than chase down the leaders.

The two were caught just before the 80-kilometre mark by the chasing group comprising Stelling and Stermin and Wilson and Engelbrecht.

After dropping the latter pair on the final climbs, the remaining four riders paced together to the finish.

Twenty-year-old Cooper said he was looking forward to the final stage because of his team-mate’s background as a downhiller. “Jarryd is extremely strong on the single track, so we’re going to hammer it on the descents.”

The two Team bizhub-FCF pairings once again dominated the women’s race with Nicci Grobler and Leana de Jager taking the stage win in 5:42:47 on this occasion. They were followed seven seconds later by stage one winners Catherine Williamson and Yolandi du Toit.

Unfortunate early leaders Williamson and Du Toit followed one of the lead bunches off course early on and had to ride hard to reel in Grobler and De Jager after 20 kilometres, from which point on the foursome worked together.

Williamson and Du Toit retain the women’s lead with a combined time of 10:44:05, which also puts them 14th overall.

Team Rocket-Medac’s Hannele Steyn-Kotze and Chris Nel beat Team Giant-Mavic’s Ann Harrison and Paul Jacobs by a single second in the mixed section for their second stage win of the race. They stopped the clock on 5:41:12 for a total time of 10:41:08.