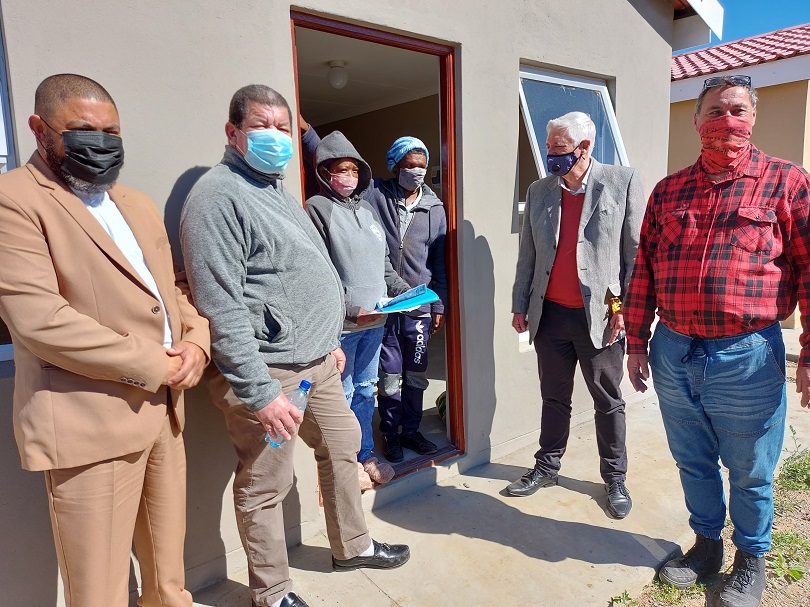 Executive Mayor Leon Van Wyk shared in the joy of 14 residents receiving their new homes at the latest Golden Valley 133 EHP handover on Wednesday 8 September in Blanco, imploring them as new owners to look after their most valuable asset.

Title deeds for the new homes valued at R170 000 each were handed over to the residents. A total of 34 houses have been completed of Phase 1, which consists of the building of 133 top structures (actual houses) to qualifying beneficiaries. Only those  houses where the  electricity connections were fully finished were handed over.

The next handover will include 24 top structures that are in the final stage of completion with the balance of the 133 units in different stages of construction. Cllr Raybin Figland reminded the beneficiaries that the title deeds received made them the legal owners of the houses. LGE Waste CEO Lorenze Gelderblom personally handed over blue recycling and green garden waste bags to the new residents and explained what can go into each. Ward councillor for Blanco, Jean Safers noted that the municipality is trying to reduce the number of  informal settlements in this area. He asked residents to keep their areas clean and to get to know their neighbours. “Let us move forward as a community, we need prayer here and let us be neighbourly with each other and mostly, let us be proud homeowners.”

Project Background:  Beneficiaries had all been pre-identified with the subsidies approved by the Western Cape Provincial Department of Human Settlements. The Golden Valley housing project will accommodate all residents of the informal areas in Blanco, although not all will receive top structures. Qualifying families where the participants are older than 35 years, and whose monthly income is less than R3 500, receive top structures.

Other residents of the informal area who do not meet the latter criteria receive a serviced erf. A serviced erf contains sewerage services with a toilet, a water connection and electricity connection. The contractor, Marnol, has been appointed by the Provincial Department of Human Settlements to complete the project.  It is envisaged that the projected completion date of the project will be November 2021.