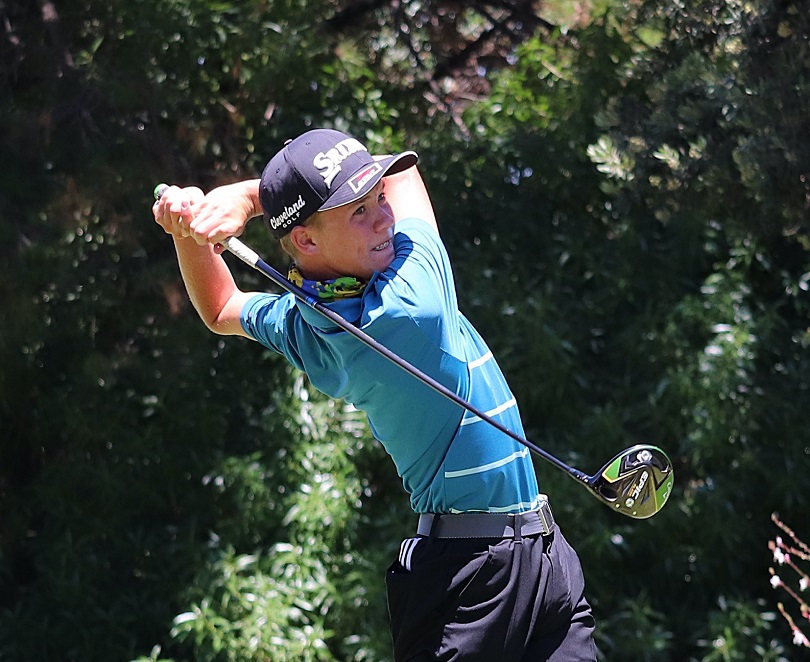 “It was raining cats and dogs so I carried extra towels to try and keep my hands dry,” said the 16-year-old Brits of a day when the magnificent Oubaai course bared its teeth.

“The wind was a factor with every shot and it was extremely difficult to have a steady putting stroke. But I managed to get round with only 26 putts, which took immense concentration!”

The Oubaai tournament was won by Jan Stals van Rooyen of Clovelly Country Cub, but Van Rooyen had already booked his spot in the Regional Final with an earlier victory on the #BridgeJuniorSeries, which meant runners-up Brits and local golfer Joshua Burki had fight it out in a sudden-death play-off to earn the qualifying spot.

Given the challenging conditions, Brits took a cautious approach at the first extra hole.

“I played it safe, hitting a low driver to the left edge of the first fairway,” explained Brits, who attends the Golf School of Excellence Cape Town at the Paul McKenzie Golf Academy. “My second shot was not that great…must have been my nerves kicking in…and my 6-iron approach into the wind missed the green by about 10m.

Brits gathered his thoughts as he approached the green, knowing his chip would be the “deal breaker”. A skilful up-and-down was enough to win as Burki bogeyed Oubaai’s par four opening hole.

By qualifying for the Regional Finals in April 2020, Brits will line up against an elite field of finalists competing for the ultimate prize – an all-expenses paid trip to the North and South Junior Championship at Pinehurst, North Carolina, which has hosted three US Opens, the PGA Championships and the Ryder Cup.

He believes having played in the regional final last season will be an advantage.

“I am a year older, more focused and working very hard on my swing and composure. The competition will be tough, but I am up for the challenge,” said the Boschenmeer Golf Estate resident.

Winning the Regional Final is just one of his goals for 2020.

“I want to break par more consistently and long term, I would like to secure a golfing scholarship to a US college, and then play compete on the European and PGA Tours. I know that there are a lot of brilliant golfers out there, so it will not be easy. But it’s been a dream of mine since I was five,” he said.

Asked what he enjoys about golf, Brits said: “It keeps me humble and every day on the course is a challenge. I meet great people and being able to share this passion with both my parents is also a plus – we play golf together as a family. I have also been privileged to play in the US, Scotland and Germany, which I will always treasure.”

Paul Stewart, Chief Executive at Bridge Fund Managers, said Brits had been a loyal supporter of the Bridge Junior Series and should be proud of having qualified for the Regional Finals in successive years: “He is a welcome addition to the elite field who will compete for that spot at Pinehurst.”

The #BridgeJuniorSeries launched in 2017 and is managed by the SA Golf Development Board and endorsed by GolfRSA. Open to boys and girls in the U13 and U19 divisions, it is played across 18 tournaments hosted by leading courses countrywide. Prizes for both divisions are sponsored by TaylorMade South Africa.

Visit juniorseries.bridgefm.co.za for the full schedule and entry mechanism, or contact Peter Little of the SAGDB on littlegolfers2@gmail.com.