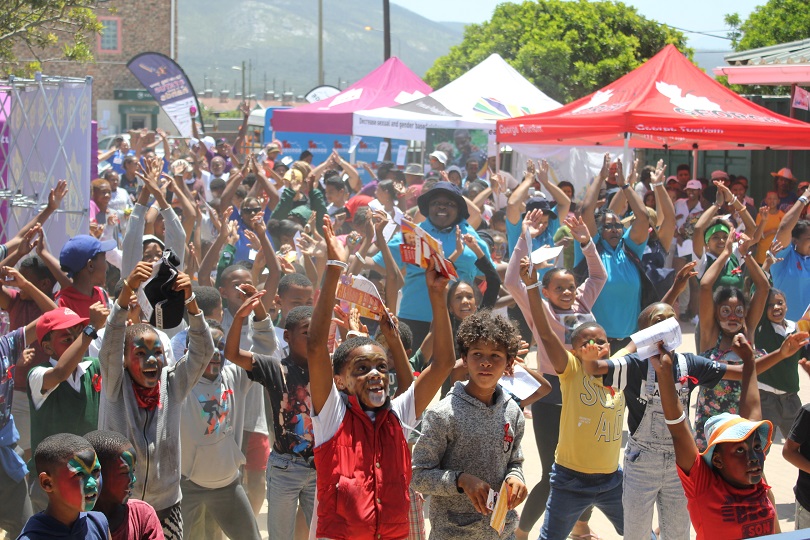 George Municipality in conjunction with other stakeholders celebrated World AIDS day in Waboomskraal and Touwsranten to raise awareness about the disease, what help there is for the public and especially the youth, to commemorate those who have passed and celebrate increased access to treatment and prevention services.

World AIDS Day is celebrated on December 1st each year around the world to raise awareness of the disease, celebrate an increased access to treatment and prevention services and more. An awareness event was held on 6 December 2019 at the Waboomskraal Thusong Centre for the community.  A fun walk from the Terblanche farm to Waboomskraal Thusong Centre was held to spread the message of hope.

Various organisations presented their services to the community. Health tests were done by the Department of Health, Bethesda Hospice and SHE(Social Health and Empowerment). People were tested for HIV, TB, STI screening, blood pressure, diabetes and more.

Educational games were played with the children and youth to spread the HIV message.

The Executive Mayor, Ald Melvin Naik, told the community to be responsible for their own health and to be safe over the festive season.  Cllr Sean Smith, Portfolio Councillor for Social Community Services, motivated the community to get tested for HIV and other illnesses.

Five food parcels, twenty blankets and thirty toiletry sets were given away during a lucky draw.
The event was well attended and over 200 young adults and community members were reached.

George Municipality and other stakeholders made sure that Touwsranten was the place to be on 28 November 2019. A stage, DJ, music, dancing, numerous stalls and give-aways made for a great World AIDS Day and B-Wise event.

Numerous stakeholders came together to create something special for the youth on the day, and by the looks of it they were not disappointed. Almost 500 people attended the event.

George Municipality, Western Cape Government Health, B-Wise, LoveLife and She Conquers (Social Health and Empowerment)were the main organisers on the day. Youth, however, had the opportunity to visit many other stalls with valuable information such as the Seven Passes initiative, South Cape College, Ithemba Lobombi and many more.

The aim of the day was to highlight World Aids Day, get youth signed up on B-Wise and to discuss the She Conquers initiative. All of these are aimed at reducing HIV infections, teenage pregnancy and to uplift our youth to reach their full potential.