A very Merry Christmas to you all from all of us here at Ster-Kinekor. Here’s hoping that Santa brings you all the gifts you could wish for this festive season, and that you get a chance to relax with friends and family, and who knows, maybe even take in a show at Ster-Kinekor Theatres – your happy place.

Steven Spielberg’s motion-capture blockbuster Adventures of Tintin is our lead title this week. Young journalist Tintin sets off with his little dog snowy and sidekick Captain Haddock on an adventure to uncover hidden treasure. Book Now!

Also released this week is:

On Cinema Nouveau screens you can enjoy The political thriller The Ides of March which stars Ryan Gosling as Stephen Myers, idealistic deputy campaign manager to George Clooney’s Presidency-seeking Governor Morris who falls prey to the dangers of political double-dealing. Book Now!

No need to stop for the action, visit www.sterkinekor.mobi on your cellphone for more information on the latest releases showing at a Theatre near you! Plus you can now pre-book your seats!
Adventures of Tintin 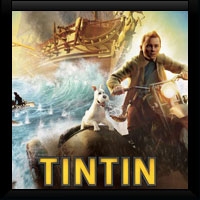 Steven Spielberg brings to the screen this computer-animated motion-capture adaptation of cartoonist Herge’s most famous character, Tintin. This is the first instalment of a planned trilogy in which young reporter Tintin (voice of Jamie Bell) meets Captain Haddock (Andy Serkis) and they set off to find hidden treasure together.