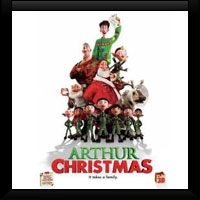 School holidays are finally here and parents are no doubt looking for ways to entertain the younger members of the family during the run up to Christmas 2011. While you’re out shopping for presents, why not take some well-earned time out and relax for a couple of hours while taking in a movie together at Ster-Kinekor Theatres – your happy place.

Santa’s own son comes to the rescue of a disappointed child in the animated Christmas comedy, Arthur Christmas. Santa has gone hi-tech, but when a computer glitch means one child will get no presents, Arthur and some well-loved flying animals are the only ones that can save her special day. Book Now!

The comedy drama New Year’s Eve is set in the bustle of New York, as a number of characters with intertwining stories set about preparing for the most dazzling night of the year. The film stars Robert De Niro, Michelle Pfeiffer, Hilary Swank, Ashton Kutcher and Halle Berry among others. Watch the trailer!

Other top titles released this week are:

Don’t Miss Out On:

Ladies don’t forget about this evening’s Girlfriends Getaway, we are screening the hilarious comedy New Year’s Eve. There will also be fabulous goodies up for grabs and the chance to win an exclusive Jacques Lemans Watch – the perfect bling for any New year’s Eve party. Book Now!

This imaginative and clever 3D CG-animated family comedy from Wallace & Gromit & Chicken Run creators Aardman Features blows the lid once and for all off every child’;s most compelling question: How does Santa deliver all those presents in one night? The answer: Santa has embraced technology to its fullest and his ultra-high-tech toy making and delivery operation hidden beneath the North Pole, his army of 1.6 million elves and his massive, top secret delivery UFO go a long way to making his task an achievable one.

But when a computer glitch causes one small household to be overlooked on the Christmas Eve present delivery manifest, it is up to Santa Claus’;s own son, the idealistic dreamer Arthur (James McAvoy) who loves Christmas more than anyone because of the thrill it brings to children, to save the day with the help of an old sled and some well-loved 4-legged friends.

The toy that Steve steps on towards the end of the film is Shaun the Sheep, another famous Aardman character.

The second consecutive film written by Peter Baynham to have the name Arthur in its title, the first being Arthur starring Russell Brand.