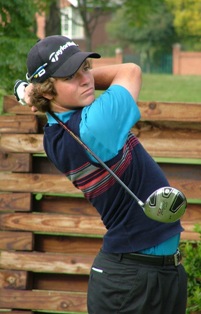 Francois Coetzee moved one shot closer to his dream of competing on the 2012 Sunshine Tour when he carded 71 for round three of Qualifying School and moved into a one-stroke lead on Thursday.

“To qualify for the Sunshine Tour is a stepping stone to my dreams. To me it’s a really big deal – it’s what I’ve been aspiring to over the last four years.”

The 22-year-old headed into day three with an eight-under-par tally and carded a steady third round to finish one stroke clear of Wesley Worster, Thomas Lovett and Danie van Tonder.

Coetzee scratched four birdies into his card, but struggled after the turn and made drops at 10 and 11.

A final bogey on 17 would leave him to sign for one-under. “Today was a bit of a struggle. I didn’t hit the ball very well off the tee, but I managed to bring it back with good iron play. I was in the trees a lot, but my scrambling was really on form,” he said.

Coetzee was a solid sportsman throughout school – he played rugby, cricket and tennis – yet he declared golf to be his passion, saying: “Golf is the best game. It’s a wonderful game because every shot and every day is different.”

Training has clearly rewarded him, not just with a second-round 65, but rather with sub-par rounds for all three days, which is a feat only five other players from the 252-man field have accomplished. “I’ve played amateur tournaments for the last four years and I’ve been working with Llewellyn van Leeuwen at Centurion Country Club. That’s brought my game a really long way,” he said.

Another of the five to successively stay below par was Danie van Tonder, whose 67 was the best round of the day and set him hot on the leader’s heels.

He went bogey-free around Schoeman Park and made birdies at 3, 5, 6, 12 and 18 to join the frontrunners ahead of the penultimate round.

Friday will see the full field head to Schoeman Park and Bloemfontein Golf Clubs for the last time – Saturday’s round will play out over the latter of the two tracks and contain the top 65 and ties after 72 holes.

When asked about his strategy for Friday, Coetzee displayed the composure expected from a Sunshine Tour professional, saying: “Bloemfontein has firmer greens, which make it a bit more difficult for me, but that’s part of the game of golf – you just go out and play the course as best as you can.”