Congratulations and well done to the first of our school-going members who have finished their school year and are beginning their well-deserved holidays from all of us at Ster-Kinekor Theatres – your happy place.

Hugh Jackman stars in the sci-fi drama Real Steel which is set in the near future as a former boxer who lost his chance at a title when fighters were replaced in the ring by giant steel robots which do battle before thrilled audiences. However, when he reconnects with his young son, he gets one last shot at the big time. Book now!

Because we love Hugh Jackman as much as the next girl, we’ve got free posters of the lovely Hugh at cinemas for you to collect this weekend.

Remember to watch Real Steel and any other two titles in the My Happy Holiday promotion and you could win a trip for four to Dubai.

The animated 3D comedy adventure Puss In Boots 3D features the voice talents of Antonio Banderas and tells the story of Puss from a time before he met and joined forces with Shrek and Donkey. Watch the trailer! 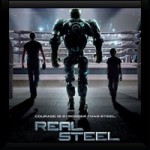 This gritty, white-knuckle, action ride from director/producer Shawn Levy (Night at the Museum, Date Night) is set in the near-future, where the sport of boxing has gone hi-tech. Charlie Kenton (Hugh Jackman) is a washed-up boxer who lost his chance at a title when the sport suddenly changed and fighters were replaced by 2000-pound, 8-foot-tall steel robots who took over the ring.

Now reduced to the role of small-time promoter, Charlie earns just enough money piecing together low-end robots from scrap metal to get from one underground boxing venue to the next. When Charlie hits rock bottom, he reluctantly teams up with his estranged son Max (Dakota Goyo) to build and train a championship contender. And now, as the stakes in the brutal, no-holds-barred arena are raised, Charlie and Max, against all odds, get one last shot at a comeback.