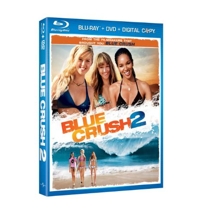 UNIVERSAL CITY, Calif., Feb. 24, 2011 /PRNewswire/ — A young woman takes the journey of a lifetime along the jaw-dropping beaches of South Africa in the all-new surfing adventure Blue Crush 2, coming exclusively to Blu-ray(TM) and DVD June 7, 2011. From Universal Studios Home Entertainment and Imagine Entertainment – the filmmakers behind the original Blue Crush – Blue Crush 2 follows a high-spirited California surfer girl as she treks acrossthe magnificent beaches of South Africa, making new friends, finding romance and riding epic waves. Filmed along one of the most exotic and dangerous shorelines in the world, Blue Crush 2 is available for a limited time only as a Blu-ray(TM) Combo Pack featuring Blu-ray(TM), DVD and downloadable digital copy.

A gorgeous and talented young cast including Sasha Jackson (“One Tree Hill”), Sharni Vinson (Step Up 3-D), Elizabeth Mathis (Tron: Legacy, Unstoppable), Ben Milliken (Newcastle) and newcomer Chris Fisher is joined by some of the world’s preeminent surfers at the renowned “home of the perfect wave,” Jeffrey’s Bay (aka “J-Bay”), as well as other spectacular South African surf destinations including North Beach, Glenmore, Banana Beach and Coffee Bay.

The Blu-ray(TM) and DVD version of Blue Crush 2 includes the following bonus features:
— DELETED SCENES
— GAG REEL
— THE MAKING OF BLUE CRUSH 2–Dive into the world of Blue Crush 2 as the
cast and crew of the film offer an inside look at the film’s
behind-the-scenes secrets.
— SURF SAFARI! FILMING IN SOUTH AFRICA–From Durban’s bustling street
markets to the dazzling wildlife of the African plains, Blue Crush 2
showcases the beauty of South Africa in all its diversity. The cast and
crew take viewers on a very personal guided tour of this amazing
location.
— RIPPING IT! SHOOTING THE SURF SCENES–The filmmakers reveal the
intricate techniques they used to create some of the most awesome surf
ever seen. They also take viewers behind the scenes to look at how the
film’s stars trained for the intense surfing sequences.
— FEATURE COMMENTARY WITH DIRECTOR MIKE ELLIOTT AND CAST
Blu-ray(TM) exclusive features include:
— BD-LIVE(TM) – Access the BD-Live(TM) Center through your
Internet-connected player to access the latest trailers and more!
— MY SCENES: Bookmark your favorite scenes from the film.
— pocket BLU(TM): The groundbreaking pocket BLU(TM) app uses iPhone®,
iPod® touch, BlackBerry®, Nokia® Smartphone, Android(TM), PC and
Mac® to work seamlessly with a network-connected Blu-ray(TM) player.
Also available on the iPad®, owners can enjoy a new, enhanced edition
of pocket BLU(TM) made especially to take advantage of the tablet’s
larger screen and high resolution display. Consumers will be able to
browse through a library of Blu-ray(TM) content and watch entertaining
extras on-the-go in a way that’s bigger and better than ever before.
pocket BLU(TM) offers advanced features such as:
— ADVANCED REMOTE CONTROL: A sleek, elegant new way to operate your
Blu-ray(TM) player. Users can navigate through menus, playback and
BD-Live(TM) functions with ease.
— VIDEO TIMELINE: Users can easily bring up the video timeline,
allowing them to instantly access any point in the film.
— MOBILE-TO-GO: Users can unlock a selection of bonus content with
their Blu-ray(TM) discs to save to their device or to stream from
anywhere there is a Wi-Fi network, enabling them to enjoy content on
the go, anytime, anywhere.
— BROWSE TITLES: Users will have access to a complete list of pocket
BLU(TM)-enabled titles available and coming to Blu-ray(TM) Hi-Def.
They can view free previews and see what additional content is
available to unlock on their device.
— KEYBOARD: Entering data is fast and easy with your device’s
intuitive keyboard.

From the filmmakers of Blue Crush comes a movie about fun, friendship and a thrilling adventure of a lifetime. Dana, a killer surfer from California, travels to the breathtaking coasts of South Africa, determined to fulfill her mother’s dream of surfing the legendary Jeffrey’s Bay. With nothing but her mom’s journal as a guide and a fun-loving group of surf fanatics watching her back, Dana faces epic waves, tough locals and her own fears in this unforgettable surf odyssey.

The Universal Home Entertainment Productions banner develops and produces live-action and animated productions directly for the home entertainment and television markets. Since its formation in 2005, the group has assembled an exceptional roster of family fare including the brand-new animated feature-length DVD Original release The Little Engine That Could; the Daytime Emmy®-winning “Curious George” television series on PBS KIDS, currently in its fifth season; a string of hit Barbie movies, based on the world-renowned Mattel-branded doll; and the crowd pleaser Beethoven’s Big Break, based on the beloved family property. The group also has successfully built upon some of Universal’s highly celebrated live-action franchises, most recently releasing the adrenaline-fueled Death Race 2 and Smokin’ Aces 2: Assassins’ Ball; as well as Bring It On: Fight to the Finish, the latest winning installment of the hugely successful Bring It On films; the popular action-adventure epic Scorpion King 2: Rise of A Warrior; and the perennial teen comedy American Pie: Book of Love. Upcoming projects currently on deck include the all-new DVD Original features Blue Crush 2 and Honey 2. The group is part of Universal Studios Home Entertainment.