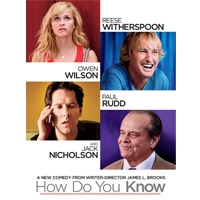 Life is full of difficult questions to which many of us do not know the answers. But how and where to find the very best in movie entertainment certainly isn’t one of them. That one’s a no-brainer. How Do You Know where to find the best movies out there? Simple. Go to Ster-Kinekor Theatres – your happy place.

The romantic comedy How Do You Know features an ensemble cast of Reese Witherspoon, Paul Rudd, Owen Wilson and Jack Nicholson. The film deals with the relationship that blooms between a man and a woman just as their lives and careers are about to go to pot.

Oscar-buzz continues with the release this week of two nominees in the Best Film category. The first of these is the Coen Brothers’ Western True Grit which stars Jeff Bridges and Matt Damon as 2 disparate lawmen leading a young girl on a mission to avenge her murdered father

Also nominated is the drama 127 Hours which is directed by Danny Boyle (Slumdog Millionaire) and which details the struggle to survive of a young hiker (James Franco) trapped in the wilderness of the American west.

Everyone’s favourite horror franchise is back for yet another terrifying entry, this time in stunning 3D. Saw 7 3D deals with the further struggles of the authorities to deal with the fallout of the death of brutal serial killer Jigsaw and those who would seek to continue his legacy.

Girls, round up your friends, pack the tissues and join us for paid pre-release screenings of the tear-jerker Love and Other Impossible Pursuits, starring the gorgeous Oscar® Nominated Natalie Portman. This drama deals with Emilia (Natalie Portman), a young wife to whom life suddenly deals a crushing setback, one she herself may have caused. As she struggles with this she finds her new stepson intends putting her through the ringer. But she soon finds that their exchanges help her develop a sense of humour about her circumstances

Love and Other Impossible Pursuits open exclusively at Ster-Kinekor Theatres on the 4th!