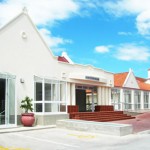 The Democratic Nursing Organisation of South Africa (Denosa) on Tuesday said it would conduct its own probe into a hostage incident at George Hospital in the Southern Cape over the weekend.

A nurse was held at knife point at the emergency ward.

No one was injured and the motive is unclear, but a 24-year-old man has been arrested.

“The emergency centre will be moving to another location in 10 days’ time, which will have improved security,” she said.

Denosa spokesperson Bongani Lose said, “On our side we will also try and investigate the matter to get some more detail as to what happened and then we will take it from there.”