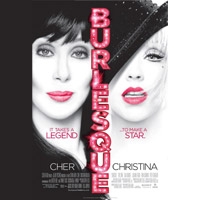 We’ve got song, dance, struggle and strife for you in a delightful mixed bag of fantastic entertainment this week, so if you want to be in the know as far as top movies are concerned, you need to get right on over to your nearest Ster-Kinekor Theatre – your happy place.

It takes a legend to make a star! Catch mega-divas Cher and Christina Aguilera in the ritzy, glitzy song and dance flick Burlesque, winner of the 2011 Golden Globe for Best Original Song ‘You Haven’t Seen the Last of Me’. It’ll leave you dancing in the aisles! Book Now!

For a more hard-hitting form of entertainment, the prison escape thriller The Next Three Days stars Russell Crowe as a desperate man who will risk everything to free his wrongly-accused wife (Elizabeth Banks) from prison, even if it means breaking her out. Watch the trailer!

The action drama Gun stars Curtis ’50 Cent’ Jackson and Val Kilmer as gun-runners in Detroit. When the Feds step up their efforts to close their illegal business down and it also transpires that there’s a snitch in their group, the pair has a fight on their hands to retain their freedom. Book Now!

Finally, the inspirational British comedy drama Made in Dagenham tells the true story of one simple factory worker’s unshakeable intent to stand up and be heard in her fight for women’s rights in the workplace. Sally Hawkins takes the lead role. Watch the trailer!

No need to stop for the action, visit www.sterkinekor.com on your cellphone for more information on the latest releases showing at a Theatre near you!