The eye-witness was confident that a shark had taken the spearfisherman and only his fishing floatation buoy remained on the sea surface about 200 meters off-shore of rocks at Salt River but there was no sign of the spearfisherman.

The sea rescue craft Leonard Smith Rescuer was launched when the eye-witness noticed a fisherman on the shore in a wet-suit but uncertain if that was the same spearfisherman.

On arrival on the scene, a flotation buoy was recovered with only the head of a Mussel Cracker fish attached.

Theodore Prinsloo, from Wellington, on holiday with his family, contacted NSRI, after seeing the NSRI rescue craft arriving in the area, and confirmed that he was the spearfisherman involved in a shark encounter while spear-fishing, and he was safe out the water and not injured.

Theodore explains that he spear fished yesterday when according to fishermen that approached him they told him that an approximately 5-meter White shark lingered in the vicinity where he was fishing but Theodore had exited the water without incident.

Today, he suspects that the same shark lingered in the vicinity where he was spearfishing, at one point swimming up close to him, he kept close to the rocks, and about 20 minutes after catching an approximately 8 to 9 kilogram Mussel Cracker that he hooked to a floatation buoy attached to his spear gun the shark grabbed the fish and made off out to sea dragging the buoy, and Theodore, with it.

Theodore was able to release the flotation buoy after being dragged for a distance of about 50 meters towards the deep sea and he quickly swam ashore.

We recovered the buoy, line and the fish head onto our sea rescue craft and Theodore and his family came to fetch the buoy and line at our sea rescue base, Theodore saying that he needs the buoy to go spearfishing tomorrow and grateful that NSRI recovered his buoy.

NSRI encourage bathers, divers and spearfishermen to be cautious of the dangers of the sea when swimming and diving. 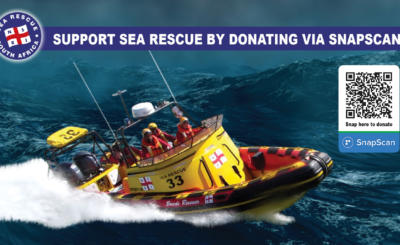 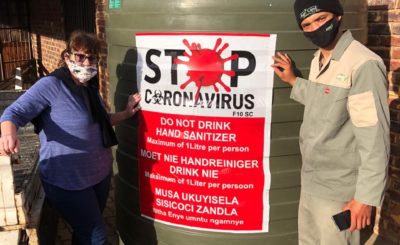