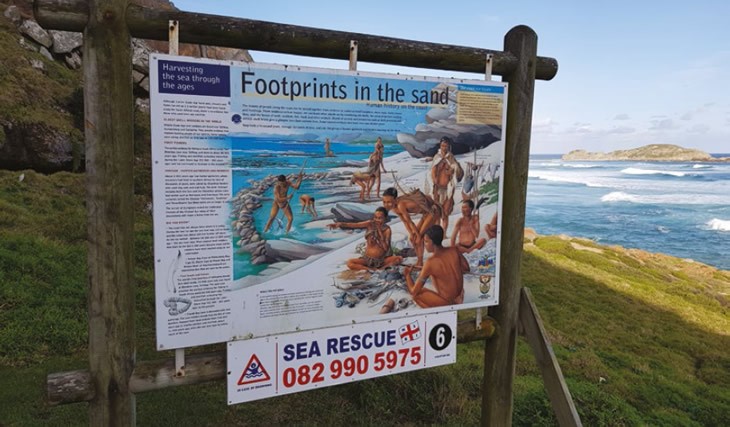 Angus Begg is an award-winning television producer, journalist and photographer. He shares his experiences with people and travel through television, print, radio and across the digital world. Plett Tourism recently commissioned Angus to create a series of stories focused on the lives and cultures of people in Plett.

In this issue, he shares the story of the Paleo Route on the southern cape coast which includes Plett’s Nelson Bay Cave and Klasies Cave.

Look how fine this detail is,” says the former political activist, standing in the cave and gesturing to a small round stone with a groove carved across its middle.

Mike Kantey, his youthful political fervour set aside, is a long-time journalist with a deep interest in natural history. He is also an ardent enthusiast about his home of the past decade, Plettenberg Bay. So much so that he’s written a small book, Navigating the Past: A Brief Illustrated History of Plettenberg Bay.

Kantey excuses the dated nature of the exhibit in which we find ourselves (as if he had built it himself). We are in a tiny rectangular room in what is known as Nelson Bay cave, a Cape Nature site, with an A-frame corrugated iron roof, lit by a naked bulb. The evolution of our species is laid out in strata, in front and to the sides, behind glass. It’s pretty big stuff.

“In the caves along this coastline has been found the evidence of significant behaviours that moved us up the evolutionary ladder,” says Kantey, “that evidence found specifically in tools and ornaments.”

The exhibit display is highly informative, but most importantly, easy to understand. Behind the glass is a cross-section of earth, detailing how the stone tools became smaller and more detailed with the passing of time, the youngest being 2000 and the oldest roughly 120 000 years old (when the tools were so broad they could’ve come out of the Flintstones).

They end up as fine tools, needles for sewing hide and what could have been grooves in sinkers for fishing. Having visited and written on the dig at Mossel Bay’s Pinnacle Point on a few occasions, and visited Maropeng and Sterkfontein in the past, I find this rustic exhibit utterly absorbing.

I think back to former Western Cape premier Helen Zille announcing the launch of the ‘Paleo Route’ at her last official public engagement at the World Travel Market in April, speaking of this being a brand new tourist experience only to be had in South Africa, of its potential world heritage site status. I think of how many times I visited Plett as a student, passing the very path down to the cave as I hiked the Robberg peninsula, without knowing what was down here.

“This site contributes to our understanding of human subsistence from about 120,000 years ago,” says Dr Jan De Vynck, an ecologist specialising in palaeoecology, at Nelson Mandela University’s African Centre for Coastal Palaeoscience (ACCP). He puts my fascination into words… continued

READ THE REST OF THE ARTICLE