A treasurer of the Pitbull Union of South Africa has been sentenced to a fine of R30‚000 or 15 months imprisonment in the Vanderbijlpark Magistrates Court after entering into a plea bargain with the State on a charge of animal cruelty. 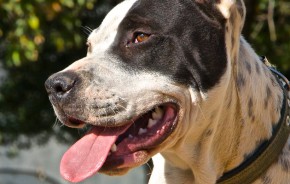 Rina Joubert was charged in March 2014 when the National Society for the Prevention of Cruelty to Animals (NSPCA) inspected her Vanderbijlpark property and found 23 abused dogs. The dogs had infected injuries‚ malnutrition and dermatitis where chains had eaten into their flesh.

Her former husband Fanie‚ also a senior official in the Pitbull Union‚ was convicted of organising dog fights in Plettenberg Bay in 2011‚ the NSPCA said in a statement. In 2012, he again pleaded guilty to animal cruelty charges laid against him in a separate case and was convicted for the manner in which he kept dogs and their neglected condition on his Roodepoort property.

The NSPCA said Mrs Joubert was sentenced on Tuesday‚ February 2. The court ordered R20‚000 of the fine or 10 months of the prison term to be suspended for five years “on condition that she does not obstruct the NSPCA or contravene any section of the Animals Protection Act during that period”.

Magistrate Buks du Plessis further ruled that Mrs Joubert must pay costs incurred by the NSPCA‚ this being a total of R15‚690 over a period of 10 months. Failure to do so would result in her arrest and the suspended portion of her sentence being enforced.

Describing the condition the animals were kept in‚ the NSPCA said its personnel found the overall hygiene standards to be very low with concerns ranging from filthy water bowls‚ flea infestations of the numerous chained pit bull terrier dogs‚ substandard shelter and decomposing dog food.

They also found a number of animals in need of immediate veterinary attention for untreated conditions‚ malnutrition‚ infected injuries‚ ulcerated tumours‚ infection of the bone‚ painful dental conditions and broken teeth. One animal even had a broken and disintegrating jaw.