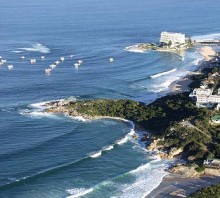 Travel Editor Carol Lazar flew to Plettenberg Bay to experience a unique dream. She also took in some of the other attractions of this popular coastal resort

I flew to Plet for two days to take an in-depth look at a building site. Crazy, you might say to yourself. True, but very interesting and during that time, I managed to get in a whole lot of other Plet activities too.

From Whale Rock Ridge you can see the whole of Plettenberg Bay – Formosa Bay, the Robberg, the Beacon Isle, the Keurboom River, lagoon and estuary and, of course, the beaches curving for as far as the eye can see.

It is here that a R7-million dream house is in the process of being built which, on February 29 2004 (and yes, next year is a leap year), will be given to the lucky winner of a remarkable competition thought up by the Global Resorts Group, the owners of Caesars Gauteng.

It’s not every day in South Africa that a R7-million house is up for grabs, so when Caesars invited me and a flotilla of other journalists down to view this sumptuous prize, it seemed churlish not to accept the invitation.

The Dream House competition was launched in March this year by Global Resorts Group CEO Ernie Joubert who, at the time, said: “This is a prize fit for a Caesar.”

It works this way. Basically everyone who visits the well-known Caesars Casino and spends R250 will receive a voucher which is then entered for a monthly draw. The more you spend, the more vouchers you can enter, and the winners of the draw receive keys which might, or might not, open the door to the dream house.

Now one of the most remarkable things about Plet is its climate. Protected by the hinterland mountains, this coastal resort has always enjoyed excellent weather and even when it’s raining a gale and the wind is howling up and down the coast, at Plet it’s sheltered.

Despite the fact that Plettenberg Bay is built up and schmaltzy – a sort of Sandton at the Sea – it’s still a magically pleasing place and the only time it becomes a trifle horrendous is during the peak season. That said, Plet holiday makers go there at precisely that time, when everyone’s there and the place is buzzing.

A few weeks ago it was blissfully still with just a sprinkling of tourists. The only hectic activity was offshore from the schools of dolphins chasing backwards and forwards.

We flew in on a Monday morning, arrived just before midday and were driven to The Plettenberg where we’d be resting our weary legs.

I remember The Plettenberg in its former life when it was a run-down beach hotel called the Look-Out. In those days, all it had going for it was its great position and incredible view.

Then, in 1987, Liz McGrath, a most remarkable top-shot hotelier, who is today one of the country’s leading businesswomen, transformed the Look-Out into the upmarket and very exclusive The Plettenberg.

Liz McGrath is herself a legendary figure in that she is the only woman in the world to own three hotels, (known as The Collection), each in its own right a member of the prestigious Relais & Chateaux group. The other two are The Cellars-Hohenhort in Cape Town and The Marine Hermanus, which, as its name suggests, is in Hermanus.

The Plettenberg is absolutely beautiful. Small and elegant, it is classically classy and when I was shown into my suite on the first floor I really did gasp. At first, all I could see from the large windows gracing the rooms was the sea, and I could have been on a ship, so close it seemed. I stepped out onto my balcony and below saw a tangle of multi-coloured fynbos making its way to the rocks and the beach.

So many mirrors were there in the bedroom that I kept thinking I was somebody else and at times, with the reflection of the sea from outside, it looked as if I was walking upon the water. The irreverent thought that I wouldn’t the first Jew to have done that did cross my mind.

I splashed my face, used the several fragrant creams and lotions on my face and hands, then dashed outside to gather for the official tour of the “Dream House”.

The sky smiled as slowly we drove to the new and expensive suburb of Whale Rock Ridge directly above Plet where this villa is magnificently positioned. Look, it’s not easy to enthuse about a building site and a half-completed house, but I can say that even in its infancy, it is a mind-blowing concept.

Our host for the weekend, Global Resorts group marketing manager Barry Whitfield, introduced us to architect Gardiol Bergenthuin who has created a double-level Balinese-style family home.

The word spacious is an understatement, for everything about the Caesars dream house is grand and, happily, each room has its own spectacular sea view. Fronting this was a deep and large hole in which a rimless pool would eventually flow seemingly into space.

The building activity was remarkably orderly, and even the construction workers in their blue overalls somehow blended into the landscape.

The villa’s interior designer is Clare Chappel, and while we looked and wondered, she and Gardiol explained their ideas. The colours, the space, what would go where E these two formidable females were womanpower personified in action and it was a grand sight to see.

So, what, you might be wondering, is a dream house doing in the travel section of a newspaper?

Well, the point is that you might conceivably be the lucky person to take possession of this valuable piece of real estate situated in one of the world’s top holiday resorts.

After a couple of hours of site inspection, it was time for refuelling and we returned to The Plettenberg for lunch at the Sand restaurant.

Young and very attractive chef Christian Campbell could give Jamie Oliver a go because he cooks like a dream and his kitchen staff produced a predominantly seafood lunch of cunning simplicity but superb taste.

Whale-watching is a popular pastime in this part of the world and the intention was to go for a cruise in the bay to check out these mystical mammals at close quarters.

However the wind had come up and the sea was choppy and would remain so for the next 24 hours. The thought of a boatload of heaving and hurling journalists obviously didn’t appeal to our hosts, who instead took us off to see a few of the attractions for which Plettenberg Bay is famous.

The Robberg Nature reserve, the red-sand promontory which juts out into the Indian Ocean, is the home of white-breasted cormorants, black oyster catchers and southern black-backed gulls. Otters scramble over its lower rocks while sharks, dolphins, seals, whales and other sea creatures swim directly below.

Visitors to this part of the world will have the holiday of their life, for there are more than enough activities to keep them happy.

Our brief stay in Plettenberg Bay passed like the wind but it did include a drive to the Old Nick Village in which talented artists, weavers, sculptors and painters exhibit their works.

In one homely cottage, we met Penelope Rudder, who paints on fabrics and makes unique batiks with a modern intepretation. In another studio, you’ll find the worlds of sculptor David Woods, elsewhere, the handcrafter jewellery of Peta Wells and Roger Vale.

Sitting outside under a tree is another local, Martie Lucas, who, with her colourful wools and spinning wheel, spins wonderful hats, scarves and other authentic woollen garments.

At sunset, we popped into a local beachfront watering hole on Lookout Beach and watched the sun drop off the horizon before heading back to the Plettenberg for a memorable dinner. The entire hotel is a delight with McGraff touches everywhere to be seen from the highly polished antiques to the fresh flowers wherever you might look.

There’s plenty to do in this not so sleepy coastal village as everyone who visits will tell you. You can walk or lie and be seen on Central, Look-Out and Robberg beaches. The energetic will sail, canoe or windsurf on the Keurbooms lagoon or in the bay. Then there’s snorkelling, diving and fishing and cruises up the Keurbooms River.

Plettenberg Bay has great little stores filled with local goodies, not that we managed to see them this time. But we did get to drive to the African Global Village where a variety of small and enticing stores and stalls nestle in lush tropical gardens.

Here you’ll find cotton garments, handmade ethnic arts and crafts. Drive a little out of Plettenberg Bay and the options are unlimited. If you’re an adrenalin freak you could bungee jump off the Bloukrans Bridge – which at 216m is the highest commercial jump in the world. Thousands of crazy people do this.

Or take a day and go and picnic and ramble through the Tsitsikamma Forest with its massive yellowwoods. Alternatively visit the picturesque town of Knysna and enjoy an oyster feast.

If you’re feeling energetic, you can go hiking, walking, mountain biking or horse riding along the beaches or in the nearby forests. Just 16km east of Plet is fascinating Monkeyland (an outing not to be missed), and the Knysna Elephant Park will offer you another interesting experience.

Plettenberg Bay is a holiday paradise, but it is also a desirable place to live and Gautengers and overseas folk are moving there in numbers.