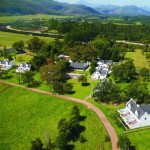 Golf estates, horse estates and other property developments that promise gracious living in safe environments are nothing new in South Africa. But Crossways FarmVillage, midway between Port Elizabeth and JeffreysBay, is the first property development in the country which promises to pay for part of the owners’ costs because it is located on a working farm owned by the property owners and thus has them as a captive market.

The first houses in the development, the brainchild of Dr Chris Mulder, the creator of the upmarket ThesenIsland waterfront estate in Knysna, are already being built.

Crossways will be developed in eight phases and is expected to be completed by about 2020. By then, it will encompass more than 700 stands in various sections on both sides of the southern end of the Van Stadens River bridge. And by then, it will have cost Mulder’s company, CMAI Property Development, about R160-million for infrastructure.

But unlike ThesenIsland, the Crossways stands are generally moderately priced, because land in this relatively remote location is lower-priced. Crossways stand prices range from only R220?000 for a small plot close to the centre of the first-phase village to more than R2-million for those on the edge of the Van Staden’s gorge. Mulder said he was aiming for a spread of income groups.

Stand owners arrange for the building of their own houses/units within the specifications required by the developers.

This kind of building arrangement is fairly standard in property developments, as are Crossways’ security and access arrangements, the provisions for shopping, education, health, sporting facilities and so on.

What is not standard is that the village is centred on an existing 500-cow working dairy farm, which is being extended with the development of orchards and produce gardens. The development also has a light industrial area for industries such as furniture-making and small-scale agricultural processing.

The ownership of the farm and the industrial area will be transferred from the developers to the Crossways’ homeowners’ association, which will collect rentals from them, but not have the right to sell the assets.

Productive facilities will be rented out to suitable candidates who will have a natural incentive to produce food and other goods, which could be purchased by townspeople. Coetzee said one candidate for the light industrial area plans to produce garden furniture, which could be sold to new home owners. And, she added, it was planned that three-hour-old milk would be delivered (by horse cart, according to the sales pitch) to residents at a price 20% lower than shop milk. Likewise, other produce and products derived from the farm will be sold at the ­village market. Revenue from rentals would be offset against charges for maintenance and community facilities, which should reduce levies considerably, Coetzee said.

Rates will be paid to the KougaLocalMunicipality, but the development company will provide all the infrastructure and hopes to do so more efficiently and cheaply than a municipality would.

Owners will have the opportunity to participate in farming operations.  For instance, a cow-share ownership scheme is mooted, with the owner receiving a monthly cheque for the milk produced by the investment.

Participation in fruit and vegetable farming and in artisanal cheese and yoghurt production will also be possible. Coetzee said most buyers so far appeared to be pleased to have the farm close by, but do not intend to participate in farming themselves.

She said the buyers had been of every type, from singles to retired couples — but most had been families in the 25 to 55 age range.

Surprisingly, only 9% would be taking bonds for their stands; the rest would pay cash, indicating that they would not be living in the sticks because of poverty. Many would work in Port Elizabeth, 35km away.

Mulder has built a strong social responsibility element into the development. For instance, it has committed to employing people from the closest town, Thornhill, and if the required skills cannot be found there, from towns slightly further away, such as Hankey and Lourie.

Furthermore, 1% of all of phase-two sales (capped at R15-million) will go into a Thornhill community trust fund, as well as 0.5% of resale amounts.

Mulder said that the completed development would have created nearly 3?000 construction jobs and 700 permanent jobs in a largely agricultural area where there are few job opportunities. He said there were opportunities for companies to start training facilities and other ventures in the development as part of their corporate social responsibility plans.

Coetzee said such prospects and the Eastern Cape provincial and municipal administrations’ hunger for development had helped to achieve rapid approval for the concept and plans. She said she first pointed out the Van Stadens site to Mulder in 2007. He applied for the rights in 2008 and they were all granted by March 2010. Sales of phase one started in December 2010.

The “excellent co-operation” contrasted with the battle Mulder was having with the Western Cape administration on his other developments, she said.

Mulder, 71, started his career as a farmer and said he had a passion for rural development, job creation and economic development. He graduated with a doctorate in environmental design in 1980 from the TexasA&MUniversity. In 2011, he received that university’s Outstanding International Alumnus Award for having “consistently demonstrated himself to be a model of citizenship, for professionalism and scholarship”. He joined 14 other non-American former students of the university to receive the award.

Mulder’s three other incipient developments, all of which are planned to have income-generating aspects are: Flamink Vlei at Velddrift on the West Coast (it will have a fish farm); Kurland at Plettenberg Bay (fruit and meat production); and Boplaas at JeffreysBay (a small dairy on the urban fringe).

Also close to Mulder’s heart in the Crossways development are the environmental options available in the building of the accommodation. The specifications require that all units have solar panels and a water harvesting system. Beyond that, they may use state-supplied electricity and water and, so far, most owners have taken that option.

But there is also the option of going entirely off the grid. To this end, the Port Elizabeth-based Rhino Group is erecting two show houses on the estate that are entirely grid independent.

The houses have double glazing among other insulation features and underfloor water heating and cooling, solar photovoltaic panels, inverters and deep cycle battery banks, as well as roof gardens.

Hot water is heated with solar heating systems backed by heat pumps. All rainwater is harvested and stored and can be ozone treated. “Black water” is treated in a bio-digester, as is all kitchen waste.

State-of-the-art technology, such as fibreoptic cabling for the provision of services such as internet, security or remote meter reading, is also being installed.