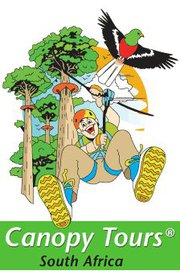 If ever you need a poster boy for the potential for a tourism product to improve the lives of people (and animals), may I suggest you look no further than Canopy Tours South Africa? www.canopytour.co.za  and www.facebook.com/tsitsikammacanopytours

I know I’ve recently written about the original operation (Tsitsikamma Canopy Tours, operated by Storms River Adventures – in ‘Ethical Tourism – Does South Africa have lessons for the world?’), but I think it’s important to know that Tsitsikamma has now become one of six similar products situated in some of the most exciting tourism destinations in Southern Africa.

Canopy Tours have now also been established in Karkloof, Magaliesburg, Magoebaskloof, Drakensberg, and Swaziland – and, significantly, they all share the same principles of upliftment and community involvement.

I was fortunate and honoured to have been invited to the launch in 2001 – and, a fortnight ago, to the company’s tenth anniversary dinner, which took place at the Tsitsikamma Village Inn (which, by the way, was celebrating an anniversary of its own – the first since new owners and managers Chris and Irma de Villiers took office. And what a job they’ve done of revitalising the place!).

The 40 or so members of the staff of Storms River Adventures made up most of the guest list, but also present were a handful of VIPs (SANParks officials, a DJ from Radio Algoa), the owners of the various Canopy Tours around the country, and some friends of Ashley Wentworth (the founder of Stormsriver Adventures), and engineer Mark Brown (Ashley’s business partner, and the man who both brought the concept from Costa Rica to South Africa, and designs all the local installations).

Forget the Ashleys, the Marks, the owners, and the VIPs of this world – the real stars of the evening were the staff, and their stories.

And let’s forget, too, the fact that the team put on a hilarious programme of after-supper entertainment (super energetic hip-hop dancing, side-splitting skits like the one about the Japanese tourist who couldn’t speak much English: the sales person carefully explaining the price of the tour , while all the poor man really wanted was to know where he could find the toilet. Tour… Toilet. Try saying *them* with a Japanese accent…).

What really counted was how the members of the team totally shone with their positive attitudes to life, and their real affection for one another.

This doesn’t happen just by chance: Canopy Tours has a policy of promoting from within, and of training, training, training, and training again. So even the receptionist will be a qualified field guide – and if, as it has, in fact, happened, the receptionist isn’t happy dealing with the guests, but shows a superb head for figures: why, she could find herself working her way up to becoming the financial controller of the company.

In a small village like Tsitsikamma, the fact that one operation employs more than 40 locals is impressive enough, but if you look around, you’ll see that it does more than that: it creates the economic hub of the community.

As it was going to be a late night, the team was kind enough to put me up at Marco and Bev’s wonderfully comfortable and welcoming Cape-style guest house, At The Woods, and I’m convinced that there’d be a lot fewer such establishments in the village if the Canopy Tour was to disappear. With tours departing every half hour from 8:00 a.m. to 3:00 p.m., there’s a lot of room for a lot of people to pour their tourist rands into the Tsitsikamma – and many of them are going to want to stay overnight, as I did, rather than simply rushing off to the next destination.

What happens with those tourist rands, though, is what counts. At Tsitsikamma Canopy Tours, many of them go into AIDS projects, animal welfare, school feeding schemes, training and personal development, and more (and that’s without considering what goes back into the community in the form of wages – and the increased purchasing power that creates).

And, as with Tsitsikamma, so with the others. And the combined effect is staggering.

I wonder if any of the truly large tourism corporations in this country can match the amount of time, energy, and money that the various Canopy Tours put into the upliftment of rural communities…

But can you imagine the impact if they did?

To Ashley, Mark, and the Team: my heartiest congratulations. You’re my heroes.