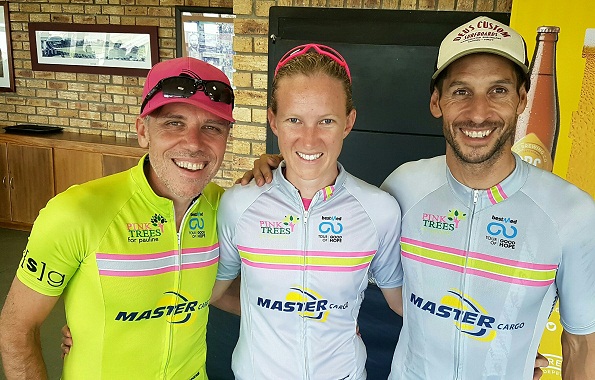 Annemie Koen from Mossel Bay, one of South Africa’s up and coming women cyclists will wear the Yellow Jersey for the second consecutive day On Wednesday in the Bestmed Tour of Good Hope, South Africa’s premier road race that is at present being held in Paarl.

Koen (31), who is one of the Pink Trees for Pauline riders, has only been cycling for the past three years. She was the first lady on Monday to cross the finish line in the open women’s category, covering the 132km in a time of 3:44:06 This was recorded at an average speed of 35 km/h, her highest speed over this distance.

Annemie started the time trial category on Tuesday in the Yellow Jersey. She managed to finish the 26.1km in 3:42:13, which placed her second behind Kelly Tome. The third place went to Marisa van der Linde.

However, Annemie’s overall time of is still the lowest which keeps her in the lead and the Yellow Jersey.

Koen is one of 12 cyclists from across the country and abroad that is competing to generate funds for the NPO (non-profit organisation) Pink Trees for Pauline (PTfP), which operates in 115 towns in South Africa to assists patients to gain entry to cancer treatment.

Dorian Wrigley (49), a veteran rider from Johannesburg, who won the race in the men’s open category last year, now lies third on the leaderboard after the time trial category. On Monday he rode a magnificent race and finished fourth in the open men’s category in a good time of 03:26:48, six seconds behind the first place. Kelson da Cruz (03:36:24) came in on the 11th and Nick Vink (03:36:25), both from Cape Town, in 12th place.

In 18th and 19th place respectively was Antonio Cencherie (Cape Town) and Tom Briggs (originally from the United Kingdom and now living in Cape Town). Briggs was unfortunate to miss out on a podium finish after spending most of the race in the break.

After the second day of racing, the Pink Trees for Pauline team riders are in very good positions. Apart from Wrigley in third place Tom Biggs, who came second in the trail run and now lies sixth on the list of best performers. Kelson da Cruz, Nick Vind, and Antonio Cencherle are all under the Top 20 riders.

The riders, dressed in gear sponsored by Master Cargo, a premier transport company moving retail goods countrywide and across the borders, are riding for the awareness as well as to generate funds. With the logo Wrapped in Colour, United in Hope, Pink Trees for Pauline really tries to make a difference in the life of cancer patients.

You too can get involved by pledging a donation. Click on the link, It is so easy and by pledging any amount, you too can make it possible for Pink Trees for Pauline to make a difference in the lives of people living with cancer.