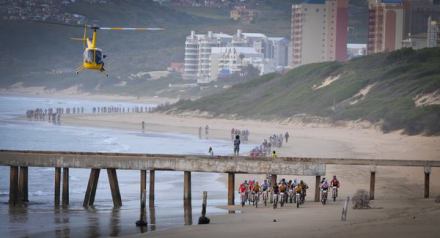 Running from 18-24 October 2015, the Cape Pioneer Trek, which is a UCI-graded event, will cover a total of 541 kilometres with 11 320 metres of ascent, as it takes riders through three different eco-regions in the Western Cape province.

The dramatic route changes from previous editions will see the race begin in the coastal town of Mossel Bay, starting and finishing at the Point on the water’s edge with a very urban-style 15.5km route that includes some steep climbs and a passing of the Bay of St Blaize (Santos Beach), the place where Portuguese explorer, Bartholomew Diaz, the first ever European to set foot in South Africa, landed in 1488.

Stage 1 then takes the riders northwards on a seven-kilometre beach ride from Mossel Bay and then inland for a tough 110km leg that includes 2 232 metres of climbing along the base of the Outeniqua Mountains, ending in George.

Stage 2 from George to Oudtshoorn, is a relatively short 84km leg, but includes the climb of the Montagu Pass as well as old Voortrekker wagon trails and also passes through the Chandelier Game Reserve; while Stage 3 is another 84km haul from Oudtshoorn to De Rust via the Kammanasie reserve.

Stage 4 sees the traditional ascent of the Swartberg Pass, but from a completely different approach that includes the climb of Spitskop and a pedal past the Kango Caves. Then there’s a significant 2 149m of climbing on this day with the final 11km on the Swartberg Pass to the mountain-top finish.

Stage 5 sees an unprecedented back-to-back ascent of the Swartberg Pass taking riders the opposite direction to Stage 4 on a longer 113km leg with 2262 metres of climbing, starting in Prince Albert and finishing in Calitzdorp. The organisers expect this to be the toughest stage of the 2015 edition.

The final day, Stage 6, is a relatively short 65km section from Calitzdorp to Oudtshoorn.

The Cape Pioneer Trek has been embraced by the harbour village of Mossel Bay. The race visited the coastal town once before, in 2010, its second year, but has now developed into one of the world’s premier bicycle stage races, bringing with it a high level of prestige, as well as international media coverage.

“We are delighted that Mossel Bay has been included in the 2015 Cape Pioneer Trek route. The race has already built up a reputation for itself as one of the premier mountain bike races in South Africa and we believe that Mossel Bay’s natural beauty and facilities will add another attractive dimension to this prestige event,” said Executive Mayor of Mossel Bay, Alderlady Marie Ferreira.

“We are sure the Cape Pioneer Trek will go from strength to strength and further enhance the Little Karoo and Garden Route’s reputation as the heartland of mountain bike racing in South Africa.”

“We are excited about the significant changes for our seventh edition,” said Henco Rademeyer of Dryland Event Management, co-founder and race director of the Cape Pioneer Trek.

“This is the first year we will not start in Oudtshoorn, which has allowed us to introduce a point-to-point route format for the first time. This opens up a whole lot of options for us in terms of route changes in future years too.

“The other exciting change is the back-to-back stages that climb the Swartberg Pass. Normally we only climb this mountain from the Oudtshoorn (south) side. But this time we’ll also return again from the Prince Albert (north) side and will be able to showcase the spectacular quartzite cliffs that form part of the amazing geology of this World Heritage Site,” added Rademeyer.

Also fresh to the race are the two new stages from Oudtshoorn to De Rust and from De Rust to Prince Albert. Both will incorporate completely new routes; while another new section will be encountered when riders enter the Kammanassie Reserve from a new entry point.

“A bicycle has never been ridden up the new climb into the Kammanassie Reserve, which remains one of the most remote and rugged features of our race route. You will struggle to find another bicycle race route this diverse. From riding on the beach, then through coastal belt forest and into the dry, harsh desert conditions of the Karoo, all within the first 48 hours, is truly quite unique,” remarked Rademeyer.

“Because of the change in race route format, riders will now get an additional night’s accommodation after the prologue stage, along with three extra meals being provided compared to previous years. Changing the race route each year is always a challenge, but it’s a challenge we relish and we look forward to welcoming the riders to the incredible route of the seventh edition of the Cape Pioneer Trek,” added Rademeyer.