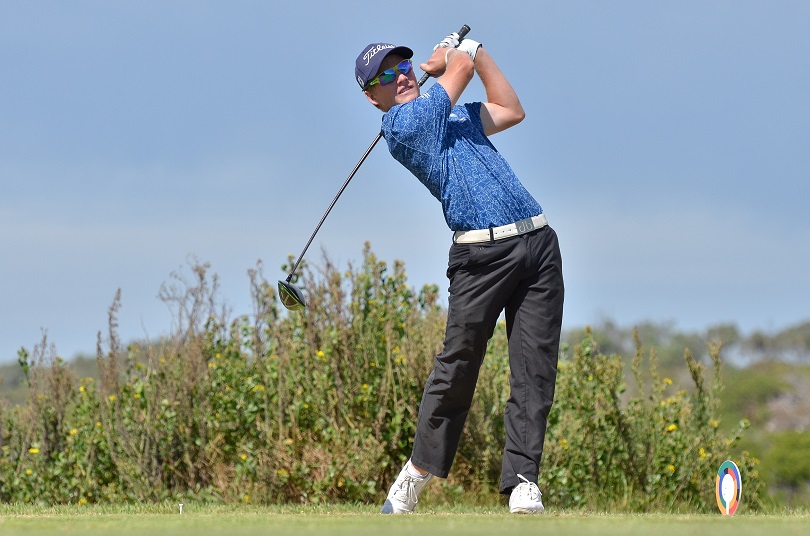 GEORGE, 23 June 2019 – Expect an exciting battle for dominance in Tuesday’s final round at Fancourt after local favourite Ben van Wyk grabbed a share of the lead in the Dimension Data Junior Open and six players finished within striking distance of leader Jack Buchanan in the Dimension Data Under-15 Challenge on Monday.

Making the most of his home course knowledge, Van Wyk racked up four birdies on the Outeniqua course, a lone bogey on the par four fifth spoiling an otherwise flawless round.

A four-under-par 68 earned the 2019 Nomads SA Boys Match Play champion a share of the lead on seven-under with Gauteng North pair Christiaan Maas and Zandre Labuschagne.

“I played quite well, but there were a few tough holes out there,” said Van Wyk. “My game plan was to try and hit every fairway and green and I did pretty well. I missed a few fairways, but not by much. The Montagu Course is a lot tougher, so I’ll stick to the same strategy in the final round.”

Maas – who held the overnight lead after an opening 68 at the par 72 Montagu course – offset a trio of birdies in his outward loop with three bogeys. He reeled in four birdies coming home to regain the outright lead, but he let it slip with a bogey finish.

Labuschagne from Pretoria Country Club was also level through the turn and he secured his share of the three-way tie at the top with birdies at 11 and 13 and a brilliant eagle at the par five 17th.

The leaders will start the final round with a two-shot cushion, but will it be enough?

James Murray from George Golf Club is just two off the pace, and Barend Botha from Oubaai Golf Club is three back after both George golfers carded rounds of 68.

GolfRSA National Squad member Cole Stevens is moved into striking distance with a 72 and the South African Golf Development Board player start the final push just four shots off the pace.

Western Province duo Ayden Senger and Francois Cilliers and Gauteng North’s Tobias de Flamingh are also still in with a shout at two-under, while the player to watch could be Samual Mckenzie from Gauteng, who took the low round honours with a seven-under-par 65.

The Royal Johannesburg and Kensington junior finished 10th on one-under.

The Dimension Data Under-15 Challenge moved to the tougher Montagu Course, where Fabi de Abreu fought hard to protect his overnight lead.

The Central Gauteng golfer was in a good position with three holes to play, but he was pipped by Buchanan, who birdied the 16th and the 18th to pull two shots ahead. Buchanan, who plays out of Milnerton Golf Club, posted one-under-71 to finish on three-under 141.

De Abreu shot 75, courtesy of three bogeys on the back nine.

Fellow Woodhill junior Michael Ferreira paid for a wayward drive at the par-three 17th with a bogey, but he made a great par save on 18 for 74 to tie for third on one-over with East London’s Werner Potgieter, who returned 73.

Successive rounds of 73 boosted Sun City Under-15 Challenge champion Jordan Wessels to joint fifth on two-over alongside Agib Aubrey Hughes and Dujuan Snyman, who both registered even par rounds of 72.

PHOTOS – Reigning Nomads SA Boys U-19 Match Play champion Ben van Wyk gave the home crowd plenty to cheer about when he grabbed a share of the second round lead in the Dimension Data Junior Open at Fancourt; credit Ernest Blignault.