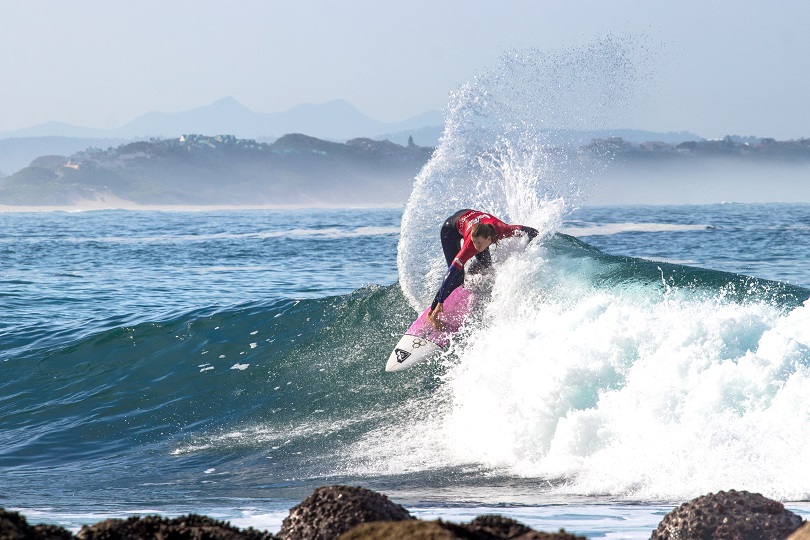 VICTORIA BAY, GEORGE, SOUTHERN CAPE – The inaugural Vic Bay Classic is the 7th stop on the World Surf League (WSL) Africa Qualifying Series (QS) Tour, the final stop on the 2019 City Surf Series (CSS) and first time since 1995 that a QS rated event is being run in the fabled  waves of Victoria Bay.

The day started with rounds of the Junior Men and Women 1 in clean 2-3ft (one meter) waves. Local surfer Aya Gericke (Wilderness) was the standout in the Junior Men’s, winning his Round 1 heat with two 7-point rides finishing ahead of goofy-footer Mitch du Preez (East London) as the pair eliminated third and fourth-placed Christian Venter (Melkbosstrand) and Wulf Erhardt (Mossel Bay).

South Africa’s Bianca Buitendag was right at home surfing at her local break in the Women’s QS 1000 rated event. Buitendag opened used her signature backhand attack to earn an excellent 8.00 from the judges and then backed that up with a 5.65 to comfortably her heat. Emma Smith (Jeffreys Bay) held onto second place ahead of Australia’s Sophie Fletcher and S’nenhlanhla Makhubu (Durban).

One of the shock losses in the first round was the departure of Hawaii’s Zoe McDougall. McDougall had plenty of success in the 2018 City Surf Series and is a threat in every heat. This time, however, she was ousted by her namesake and South African rising star Zoë Steyn. Steyn squeezed into second place ahead of McDougall in the last heat of the round and advanced to the last 16 with heat winner Piper Harrison (AUS).

The Men’s QS 1000 Round1 ended with some exciting high-performance surfing from Sandon Whittaker (AUS) who scored the highest heat total of the day. Whittaker was leading the heat with a 7.75 in the bag when he sealed the deal with an incredible 9.25 for a total of 17 points out of a possible 20, leaving his opponents in a combination situation.

Sean Holmes, a long-standing Vic Bay local and former Qualifying Series event winner advanced to the next round after finishing in second place behind Germany’s Dylan Groen. Holmes holds a unique place in the history of surfing in South Africa that included beating the late three-time world champion Andy Irons (HAW) more often than not at J-Bay, where he was recognized as the most dangerous wild-card on tour.

“It was my first QS event in a very long while. It was super clean 3-foot Vic Bay, a nice warm winter’s day and a great day for the event,” said Holmes.

Alongside Holmes was fellow Vic Bay legend and good friend David Pfaff, who struggled to find waves with decent scoring potential and was eliminated along with Angelo Faulkner (Jeffreys Bay).

“We had loads of fun. Tomorrow looks to be great as well. So stoked to be down here,” Holmes added.

The next call is for Friday, 21 June and will start with Women’s QS 1000 action.

Ocean Pledge will assist in creating ‘Blue Events,’ while the NSRI will be educating members of the public, competitors, local schools and surf outreach programs about ocean safety and ocean awareness.

More information, results, and images will be available on www.worldsurfleague.com and on the WSL App.

About the Volkswagen brand:

“We make the future real”

Volkswagen Commercial Vehicles (VWCV) is an independent brand of the global Volkswagen Group. With its manifesto „We transport success“, the company develops, manufactures and sells light commercial vehicles around the world. The longest standing and most beloved vehicle produced by VWCV is the Kombi, whilst other products include the Transporter and Caddy ranges of lifestyle and business vehicles, the Crafter and the Amarok. In 2018, the brand sold around 499 700 light commercial vehicles, which were produced at its sites in Hannover (D), Poznań (PL), Września (PL) and Pacheco (ARG). VWCV employs over 24 000 people globally.

About the World Surf League

The World Surf League (WSL) is dedicated to celebrating the world’s best surfing on the world’s best waves through a variety of best-in-class audience platforms. The organization, headquartered in Santa Monica, is a global sport with regional offices in Australasia, Africa, North America, South America, Hawaii, Japan and Europe.

The WSL has been championing the world’s best surfing since 1976, annually running more than 230 global events across the Men’s and Women’s Championship Tours, the Big Wave Tour, Redbull Airborne, Qualifying Series, Junior and Longboard Championships, as well as the WSL Big Wave Awards. The League possesses a deep appreciation for the sport’s rich heritage while promoting progression, innovation and performance at the highest levels, and in doing so crowns the undisputed Men’s and Women’s World Champions across all tours.

Surfing South Africa (SSA) is recognised as the governing body for Surfing in South Africa by the Department of Sport and Recreation. SSA is a member of the South African Sports Confederation and Olympic Committee (SASCOC) and the International Surfing Association (ISA).