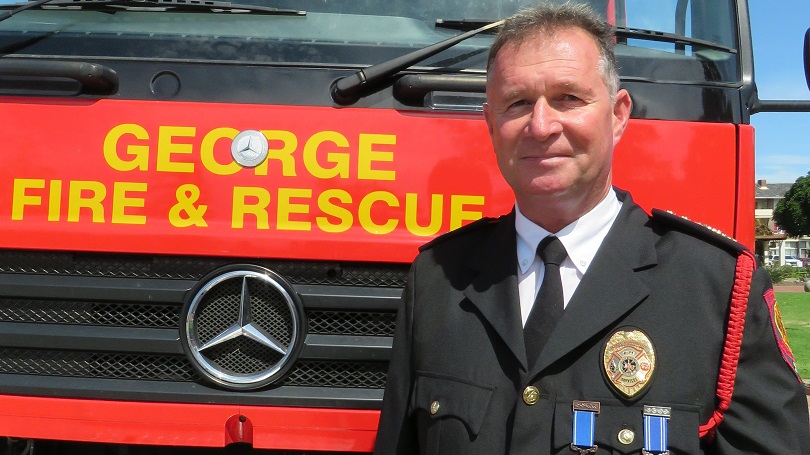 As the George Municipality and Garden Route District Municipality honour today (29 March 2019 – separate press release to be issued following the event) the many roleplayers who defended George against raging wild fires last year, the George Municipality also celebrates its fire chief Neels Barnard who, amidst the craziness of that time, commemorated 30 years as a local fireman on 16 November 2018.

“Some people dream of being a firefighter all their lives, but it didn’t happen for me like that. The job had become available, it paid okay and I thought it was something I could be good at.”

George Fire Chief Neels Barnard has been at the forefront of defending homes and people in some of the most dramatic fires in the Southern Cape since 1988 and has been an active roleplayer in Wilderness Search and Rescue (WSAR) in the Southern Cape for 25 years. Countless certificates of appreciation and newspaper clippings bear witness to his ongoing, selfless commitment and passion.

When you first meet Neels, he comes across as quiet, but is not to be underestimated. When it comes to effective firefighting, his passion has often asserted itself. “Sitting in long meetings to give feedback on a fire that is still raging, makes no sense to me – I serve my community best by being where the fire is. Emergency situations call for quick decision-making and strong leadership under pressure, so that is where and when I do my talking.”

He doesn’t really like the spotlight but has made peace with the awe his job inspires among citizens whose lives or property have been saved.  “While it is always appreciated when people recognise the danger and sacrifices, it is also just a job that I believe in doing to the best of my abilities.”

Aged 55, Neels spent seven years in the army, served as a magistrate’s clerk, went to hotel school and worked for a bit at Santos Hotel in Mossel Bay before a job at George Ambulance and Fire became available. “Those days ambulance and fire was one service in George and we would work rotation shifts on each.

“The ambulance work was exhausting, demanding and quite thankless. The hours were crazy and emergency situations diverse and from all over a large area. I spent a lot of time on the road transporting patients to and from Cape Town…and often mothers in labour who have waited too long before going to the hospital – causing havoc and resulting in quite a few babies being born in the back of the ambulance!

“The worst was always working serious motor vehicle accidents, especially when there were children involved or when people could not be saved before a vehicle caught on fire – the images stay with you forever.”

He shows me a newspaper clipping from a rescue in the mountains above Hoekwil in 1996. “WSAR shift leader Stuart Taylor and I were flown to where a chopper had crashed. We had to stabilise the injured businessman and his wife and stayed with them for two hours while the ambulance tried to reach the accident scene via a back road. Decades later, I saw the businessman at a local restaurant and went to reintroduce myself. He told me he always wondered who treated him and stayed with him on the mountain that day and wanted to say ‘thank you’. Those moments also stay with you, but for good reasons.”

Another standout rescue was at George Peak where a person had illegally tried to paraglide from the peak and crashed in a ravine sustaining serious injuries. “Stuart and I hiked up to the accident scene. The conditions were too dangerous for a rescue chopper to land and we had to hook the stretcher up as the chopper hovered for a few seconds and then flew off with the patient – and then we had to hike back down the mountain again. Seldom a dull moment in this job, that’s for sure.”

In 1997 the ambulance and fire services split, and Neels could put all his energy into firefighting which had by then become his passion. “We were six firefighters for the whole of George, two on a shift. Area fires were handled by district services, and locals and volunteers helped on larger fires, which fortunately did not happen that often.

“In comparison to the craziness of working on the ambulance service, working on just fires felt like we had so much time on our hands. We spent a lot of time tidying up the already-tidy fire station – we must have had the cleanest, neatest fire station in the district,” he says with a smile.

Neels was appointed as a leading fire fighter in 1998, divisional commander in 2008 and has been acting fire chief since 2010.

The George municipal area has grown and with it the amount of fire emergencies. These days the George Municipality Fire and Rescue has 33 firefighters on three shifts, including service to Uniondale and Haarlem. “Major wildfires in the Southern Cape in the past few years have highlighted the unique challenges local fire departments face and we have received major financial support from council as well as regional, provincial and national government to equip us with specialised equipment to deal with fires in remote areas and over difficult terrain. As a result, George is now one of the best technologically equipped stations in the Western Cape. We have also had amazing support from local business and citizens. The department is so very grateful to everyone – it will benefit everyone who lives, works and visits here for many years.”

Through the years there have been many hair-raising moments, like the day a sudden wind-change in the mountains at Herold had Neels surrounded by flames in seconds. “I was in a bakkie with a skid unit on the back and I literally soaked the bakkie inside and out with water, and jumped in the cabin with fire hose and all – aiming the hose at whatever flames I could see. The fire around me eventually burned out, but I was shaking like a leaf and it took some time for me to recover sufficiently from the shock to be able to drive out of there.”

For Neels, the wildfires that raged around George for nearly a month last October and November stand out as a major success story for planned fire protection. “It proved that fire breaks and controlled burns really work. The fire season had come nearly two months early for us last year, but the fire breaks above George were in place and we were almost done with additional controlled burns when the big fire started. The breaks slowed the fires right down, making them manageable, even close to residential areas and no homes were lost in George as a result. It was very rewarding to hear people from across the country in the fire management Joint Operations Centre refer to our fire breaks specifically and considering the breaks as reliable defence mechanisms they could use as part of managing the fire.”

He considers the firefighting staff in George as uniquely committed to their work.  “On every fire our firefighters give 150%. When I read incident reports, I marvel at the committed attempts to not only safeguard people but also at their genuine efforts to save as much as possible of the people’s property, which is often meagre and not insured. I am proud to be part of George Fire and Rescue and remain committed to my people and my community.”