George – The George Old Car Show, driven by Oakhurst Insurance Company Limited, is celebrating the 21st year of existence on 11 and 12 February 2017. 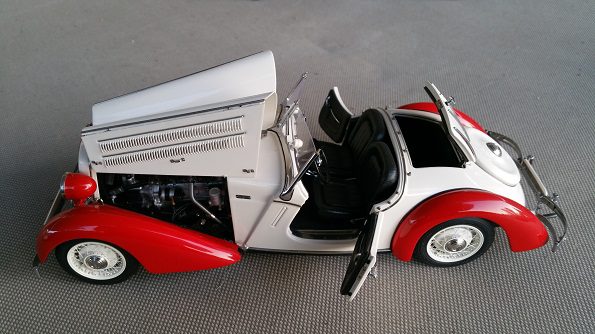 More than 15 000 miniature cars will be exhibited in four classrooms at the George Old Car show, once again hosted on the grounds of the PW Botha College in York Street.

This most popular event on the George annual calender, which was visited by a record number of 12 000 visiters last year, will celebrate its 21st anniversary with a special exhibition of vehicles manufactured in Germany. This year an exhibition of miniature model cars with a German heritage, will echo the main exhibition.

“Thirteen collectors, mostly from George, will exhibit about 2 500 of their most prized models,” said Ignatius Anker, member of the George Model Car Club, who coordinates the exhibition of miniatures.

One of the four classrooms will be dedicated to collections belonging to among others, Anker, Pierre Conradie and Ria Meyer, who continued collecting miniatures after her husband Jurie died. “Today Ria, her daughter and son are all collectors in their own right.”

Bruce Sapsford of Bloemfontein will also exhibit his rare handmade models with a scale of 1:24. “Bruce has been building models for ages and likes to show visitors to the George Old Car Show what a man can do with your own two hands.”

Three of the classrooms wil be dedicated to seventeen retailers who will bring between 10 000 and 15 000 miniatures to the show. These retailers from all over the country offers young (and older) enthusiasts the opportunity to start their own collections.

“This exhibition of model cars at the George Old Car show actually brings the models to the people. Even if you don’t buy one, the miniatures bring back sweet memories of a favourite toy from your childhood.”

Anker started collecting miniatures in Port Elizabeth in the late nineties. “Then one could still buy a fairly good 1:43 scale model for about R100 to R150, for which you will have to pay between R500 and R800 today.”

His collection fits in beautifully with the major focus on German models, because his greatest love lies with the manufacturer Audi, which include models of Audi, DKW, Auto Union, Horch, Wanderer and NSU. His collection also includes models of Volkswagen, Porche and even a Bugatti or two.

He has the following tips: “Buy the rarest model you can afford, but even a model that costs R30 which is kept intact in its wrapping will be scarce and increase in value over twenty years.”

The cheapest models are second-hand, well-played cars that are a bit tarnished by hours of play and may be missing a wheel or two. And of course, a plastic toy for a child will cost as little as R10.

CMS and Exoto are two manufacturers that provide good, rare and expensive models. “One year’s CMS models, which already cost between R4 000 and R6 000,  may not be available the next year. Who knows what they will cost when they come onto the market again!”

According to Anker it is a good excuse to buy an expensive toy on the precept that it is an investment. “You become so attached to you miniature that you cannot part with it.” His own collection are neatly stored in their original wrappings until he puts up shelves in his braai room. . .

Model cars have a rich history. The first miniatures, which were manufactured from lead and bronze during the twenties, did not represent specific models. During the forties miniatures were manufactured from pressed tin with painted windows, which could be wound up to run around on their own. During the fifties models with a metal frame and plastic windows were very popular. Today every model is an exact replica of the lifesize model, and even if you cannot afford the real macoy, the miniatures are almost as good.

Contact Ignatius Anker for more information at 082 442 9875 or makrowire@mweb.co.za

The George Old Car Show, driven by Oakhurst Insurance Company Limited, takes place at the PW Botha College in York Street, George. Besides the SAB Beer Tent, managed by George Rotary, a number of stalls will offer food, soft drinks, and a variety of merchandise for sale. At a minimal fee young children may be left to play under supervision in a safe area. Parking is available on the school premises.

The official opening by George executive mayor Melvin Naik will take place at 10:00 on Saturday.