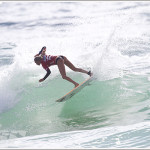 Star Australian women’s duo Tyler Wright and Stephanie Gilmore have progressed to the third round of the 2013 Vans US Open of Surfing on Wednesday at Huntington Beach Pier in California.

“I was nervous going in to that heat,” Wright said.

“I haven’t been nervous in a heat in a long time. I had a slow start and I know going up against a wildcard, they have nothing to lose.

“Leila has been ripping and I was fortunate to find two little sneaky ones in the end.”

Gilmore, who is fifth in the championship, admitted she felt rusty in her encounter with Mulanovich following a long lay-off due to a foot injury.

“I feel like I haven’t surfed an event in awhile,” Gilmore said.

“It was good to get going in that heat and refreshing to get a win. I was definitely feeling a little sluggish.

“I’ve had a lot of good things going on between events, but my foot feels fine now.

“I’m not in the best position for a World Title this year, but I want to put in a good performance.”

And the positive results for the Australian contingent continued in the men’s competition with Matt Banting and Mitch Crews both winning their respective second-round heats.

But it wasn’t all good news for the Aussies on Wednesday with Dion Atkinson (8.67) and Yadin Nicol (7.20) unable to overcome Buitendag’s compatriot Jordy Smith (17.34) in their Round 2 heat, Garrett Parkes (9.53) finishing third in his heat and Perth Standlick (9.84) ending up last in Heat 10.

Meanwhile, Rebecca Woods failed to join Wright and Gilmore in the third round of the women’s event after she lost to Hawaii’s Coco Ho 11.80 to 11.23.