It will be Jonnson College Rovers and GAP Despatch in the final of Monday’s Cell C Community Cup showpiece after both came through their semi-finals with nail-biting wins at Outeniqua Park in George on Saturday.  Rovers scored in the 80th minute of their match against East Rand Cranes Brakpan to beat the Gauteng side 29-25, while Despatch had to rely on a late dropped goal by Marlon Lewis to edge our Rustenburg Impala 21-10 to set up a rematch of the opening fixture of the inaugural tournament.  Heavy underfoot conditions and strong winds made it a difficult afternoon for all the teams, but did not deter them from fighting for the finals spot till the last seconds of the match.  This resulted in two fantastic semi-finals, with two worthy finalists emerging.Earlier in the day, Durbanville-Bellville and Pretoria Police scored good wins over Evergreens and Roodepoort, the only teams who is yet to win at Outeniqua Park this Easter.

A summary of the day’s action follows below:

The Cape Town side ran out well deserved winners over their Gauteng opponents in the opening match of the day. They scored four tries to one and their handling of the wet ball was superior to the Roodepoort side, who again played in spurts.

Durbell’s backs were also more adventurous and raced in to score the opener as soon as the third minute. Winger Edwin Sass was worked into space beautifully and scored in the corner.

A good spell by Roodepoort gave them the lead after half an hour of play when Johan Prins scored a converted try.

A penalty by Durbell’s Raynor Becker retook the lead for his side, but when Hennie Oosthuizen kicked a penalty in the 38th minute, it was Roodepoort who went into the break with a 10-8 lead.

The second half saw the best of Durbell. With their tight five getting front foot momentum, flyhalf Liaan Scriven dictated play. He fed his willing backline when needed and also played the territorial match well.

Sass scored his second after good lead-up play by the pack and then Scriven broke their hearts and defense line of Roodepoort when he ran 30 meter to score and put the match beyond the northern side. A late Mornè Meningke try just stated the obvious on the scoreboard.

A try on the final hooter by Jors Dannhauser secured Jonnson College Rovers their pass into the Cell C Community Cup final and a 29-25 win.

It was literally the last play of the match and it seemed that Brakpan, who at one stage had a 25-17 lead with less than 20 minutes to play, had done enough to secure the win. They have scored 22 unanswered points at that stage and had the momentum on their side.

Dannhauser also scored a couple of minutes earlier and Greg Goosen’s conversion closed the gap to one point. Brakpan defended with real guts, but credit to Rovers who did refused to give up.

Rovers started off very strong and it looked as if they were going to run away with this.

Converted tries by outside backs Kyle Williamson and Sergio Torrens and a penalty by Goosen justified the strong 17-3 lead at the break.

The second half was a different affair as Brakpan played great rugby. They scored three tries in fifteen minutes and it seemed that Rovers had no answer to stop the onslaught.

Dannhauser’s first stop the rot and the momentum and the second during the last play of the match secured a remarkable win.

The heavy underfoot conditions at Outeniqua Park certainly benefitted the heavier Pretoria Police pack and they took full advantage of this. 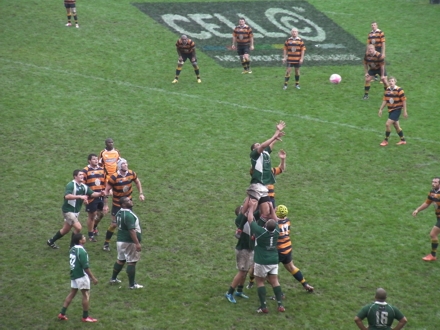 With persistent rain on the weekend making the playing surface slippery and heavy, the effectiveness of the fleet-footed Evergreens backs were nullified, but they still needed the ball to play.

The Police pack never gave them any. They bullied the home side up front and used their bulk and size to keep going forward. This opened up gaps on the outside and when it was worked wide, the Police backs were willing to run at their opponents. This resulted in no less than seven tries, with both outside backs Ruan van Loo and Michael Nienaber scoring a brace.

Nienaber had a great tournament this far and impressed with his determined running.

Police scored at will, with five tries in fifteen minutes sowing up the result before the half time hooter, when they lead 34-7. There were not much for the Evergreens band to sing about, but two tries by Gerschwin Muller had them on their feet either side of the half.

It was a hard fought affair with both heavy-weight teams determined to make Monday’s final, but in the end Despatch could claim the win and finals berth.

In a match played in atrocious conditions and with two teams so evenly matched, it was always going to be an individual moment of brilliance that was going to split them. Luckily for Despatch, it came in the form of inspirational scrumhalf Marlon Lewis, who dropped a goal nine minutes from time. That score proved decisive.

Despatch had the upper hand early, forcing the North West side into early mistakes. Unfortunately for them, Ryan Brown was off-target with his first two attempts at goal, but a good cross-kick from the flyhalf found Monty Dumond shortly after and the fullback could score the first try of the match.

Two more Brown efforts had better results and helped Despatch into a 13-0 lead. A great run by winger Berty Visser, converted by Naas Olivier who also kicked a penalty later in the half, closed the gap. Olivier kicked two more penalties shortly after the restart to draw things level and with playing conditions worsening by the minute, it became clear that scoring would become more and more difficult.

A try by Elroy Ligman has Despatch back in front, but when Visser scored his second and Olivier converted, Impala took the lead for the first time in the match.

It was left to the Lewis drop to force the result. Olivier had a chance to do the same, but pulled his effort.

Fixtures for Monday, 1 April are: