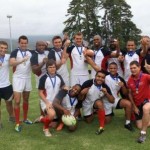 The NMMU George cricket team are the winners of the D-section of this year’s annual USSA Cricket Week and have been promoted to the C-section for next year’s tournament.

NMMU George remained unbeaten throughout the tournament hosted by Vaal University of Technology in Vanderbijlpark after four convincing victories and one no-result due to rain.

Sean Smith received the award for the best batsman of the tournament after a tally of 189 runs of only 162 balls in his four innings. His highest score of the week was 109 not out of 77 balls against the VUT Invitational side.

Other stellar performances came from batsman Patrick Hancock with 145 not out of 96 balls against Fort Hare B; stand-in bowler Brendan Louw with 5 for 14 against University of Zululand; and bowler Arnold Eshmade with 4 for 19 against the Medunsa Campus of the Universityof Limpopo.