NMMU George, winners of the Bowl Competition at the USSA Rugby Sevens tournament, showing off their medals and trophy after beating North West University’s Vaal Campus 17 û 12 in a tense final that went into sudden death overtime.

At the end of normal time the score was deadlocked at 12 points each. According to the tournament’s rules an additional five minutes was added to the time as a sudden death playoff  implying that the first team to score points would be declared the winners.

The local team from NMMU managed to control their nerves and after a number of moves that came close to the opponents’ try line, Abdul-Gasiep Jappie finally crossed the line to score for NMMU handing them the Bowl Trophy. 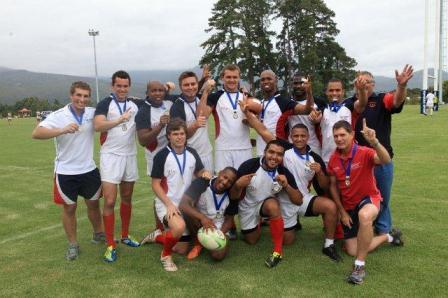 In the other finals, University of Stellenbosch retained their title when they overpowered the University of Fort Hare 29/ 7 in the final for the Cup; while Polytechnic of Namibia took the spoils in the Plate competition and Tshwane University of Technology in the Shield competition.