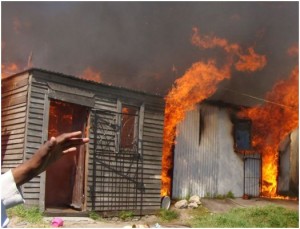 A man believed to be in his late 40’s is in a critical condition after the informal home he lived in caught alight this afternoon.

ER24 and other emergency personnel arrived on the scene and found the informal home engulfed in flames. The community showed the paramedics were the man was who had being rescued by friends after the fire had started. The man was assessed and found that he had suffered 90 percent burns to his body and was in a critical condition. Advanced Life Support intervention had to be performed on the patient before he was rushed to the local Provincial Hospital in George.

It is believed that there were two men inside the informal home when the fire broke out. The one man was lucky enough to get out while his friend got caught in the fire. The necessary authorities were on the scene and would investigate the incident further.