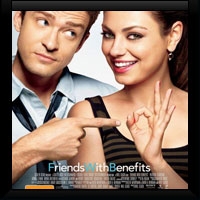 As well as the usual crop of top movie titles, we’ve got a veritable music festival on Our Big Screen this week, from former boy-band members, to the Kings of Grunge and 70’s-icons to the best of live classical music from one of the true masters of the art, all at Ster-Kinekor Theatres – your happy place.

Former Nsync singer Justin Timberlake and Black Swan star Mila Kunis star in the romantic comedy Friends with Benefits about a pair of young professionals who decide to have a physical relationship without having to suffer all the pitfalls of falling in love first. Book Now!

Spy Kids: All the Time in the World 3D with the latest innovative experience and smell the scenes with the aroma scope card. All the time in the world is the latest movie in this exciting family movie franchise and stars Jessica Alba as a young parent who has to save the world with the aid of her two step-kids. Watch the trailer!

Don’t miss out on the Pre-Release screenings of The Smurfs 3D on September the 24th at 12h00 and 14h30 at all 3D release sites. Book Now!

Traffic and Erin Brockovich director Steven Soderbergh directs Zoe Saldana in the action drama Columbiana about a young hit-woman on the trail of a crime boss who murdered her family. Book Now!

In celebration of their 20 year anniversary, the definitive portrait of rock band Pearl Jam is the documentary Pearl Jam 20 from Academy Award-winning filmmaker Cameron Crowe. The film features never-before-seen footage, recent interviews with the band, as well as live footage of their concerts. There will only be one screening of the film, on September 20th. Book Now!

Peter Gabriel: New Blood 3D is the former Genesis singer’s first foray into the world of 3D and was recorded live on stage with the man himself accompanied by a full orchestra at London’s Hammersmith Apollo. Book Now!

In this romantic comedy Jamie (Mila Kunis) and Dylan (Justin Timberlake) are each dumped by their partners and decide to be emotionally unavailable for a while. However, when they decide that a physical fling will have no impact on their friendship, they learn that getting physical really does always lead to complications.