On the final day of competition at the World Junior Surf Champs in Peru,  South Africa was in third position, with USA and Peru ahead of them. The surfers left in the competition were Davey Brand  in the qualifying round with Mikey February and Davey Van Zyl in the repo round in U18. 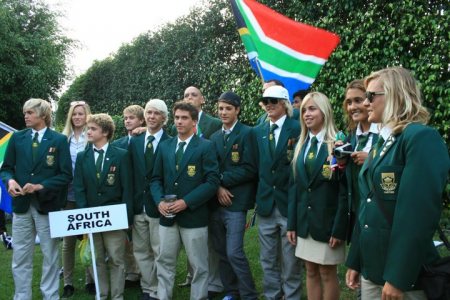 Biance Buitendag was  in the U18 Repo round and J’Bay local Dylan Lightfoot relegated to the repo round in the dying seconds of his last heat the previous day.

As the swell slowly grew to waves producing 8 – 10 foot faces, it was February and Van  Zyl  who buckled under the pressure finishing with a third in Round 8.

Brand won his his heat 6 with a fantastic 14.50 heat total to progress to the final.

With the American team dropping out dramatically in Round 9 and 10 South Africa started to push their position higher in the rankings.

The final started with Bianca surfing brilliantly but Cannelle Bulard from France took the final with Bianca earning a well deserved second.

The U16 Boys final was a tight affair. Lightfoot, who was relishing the big wall and powefrul swell , hit the lead very quickly with an opening ride of 6.5. The battle then ensued as wave after wave was  ridden by the worlds top u16’s.

At the five minute mark Lightfoot had only dropped to second for a few minutes before going up to first again.  Lightfoot and Del Castillo were tie with a heat score of 11.22, but Lightfoots highest score being a 6.5 to Castillo’s 6.14 put Lightfoot in the lead.

Seconds before the final horn, with Lightfoot keeping a close eye on Castillo to secure his win, the man in third place, Toledo from Peru, uses his local knowledge to hook a small wave on the inside and with nothing to lose attempts and air, lands it and beat Lightfoot by 0.06.

Davey Brand who was the only South African to make it through the whole competition in the qualifying round, surfed very well into a third place and brought Team South Africa to the silver medal overall.