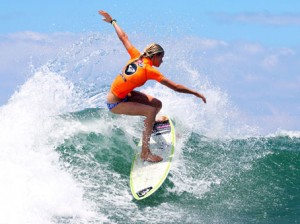 The event, which has for many years been staged at Suncoast Beach, has relocated to New Pier on the weekend of the 18th and 19th of June.

With over R33, 000 in prize money on offer, South Africa’s top female surfers from all corners of the country are expected to enter. The Women’s, U16 and U14 Divisions are sanctioned by Surfing South Africa and the U20 girls division is a 1 star ASP Pro Junior rated event. This means that the winner will have an automatic start in all of the ASP World Junior Championship events in 2011. This event is vital for all competitors who ultimately aim to be the ASP Women’s World Champion.

“ASP Africa would like to welcome such a world famous surf brand like Roxy and the Roxy Wahine Cup to the ASP family. To be associated with an event with 12 years of history is fantastic for any association,” said Colin Fitch from Association of Surfing Professionals (ASP) Africa.

Surfers to watch out for are current ASP World Junior Champion Bianca Buitendag of George as well as newly crowned SA under 20 Girls Champion Sarah Baum of Warner Beach. Baum came through the Roxy Learn To Surf program many years ago and in 2010 finished third in the Quiksilver ISA World Junior Championships in New Zealand.

Other top surfers who will be competing include newly crowned SA Women’s Champion Nikita Robb of East London, 2010 South African team member Chantelle Rautenbach of Melkbosstrand as well as Tarryn Chudleigh and Tanika Hoffman, both of Kommetjie in Cape Town. Surfers will win prize money and great prizes from sponsors Roxy and Skullcandy.

The action gets underway at 8:00am on Saturday June the 18th with finals and the awards ceremony held on the beach on Sunday afternoon.

The Roxy Wahine Cup is presented by the City of Durban in association with Suncoast Casino and supporting sponsors include Skullcandy, Softlips, Supersport and Red Bull. The ASP Pro Junior event is sanctioned by ASP while all other divisions are sanctioned by SSA, the governing body for surfing in South Africa.