Greetings Members and Friends,
We are looking forward to a successful Easter break this year, as you will have seen, the events program is really great and caters for all the Families needs. Our new “major” golf event, the foursomes, starts on Friday and is contested over Friday and Saturday. Entry into the event includes a spit braai on Saturday from 16H00 and for those interested, some great super 15 rugby will be shown in the bar.

And that’s not all, those good ol Boys at SAB have donated a fine keg of Castle draught and we will have a FREE BEER UNTIL THE FIRST POINTS ARE SCORED promotion for the Sharks vs Hurricanes game at 17H00. So make sure you are there.

Another great event I am looking forward to is the Just Jinjer concert on Sunday, bring the Family and a picnic basket and the SAB tent will cater for all of your beverage requirements. Please book soon for this, as tickets are running out. Click here to see the full program.

If you are coming to Fancourt over the Easter period, why not try and sneak out a couple of days earlier? As this Wednesday, the 20th, is our second very popular BOE Private Clients golf day. The last BOE Private Clients day saw a record field of over 80 golfers and we are expecting similar numbers on Wednesday so book early.

The course is looking fanatastic and all stops are being pulled out in preparation for this weekend. To read more about what Gerard and his team have been up to, click here.

Easter Weekend this weekend and I’m sure those of you that are making your way to Fancourt, are extremely excited as we have an awesome line up of events awaiting you! Kicking off with the Foursomes Champs on Friday afternoon on the recently hollow tined Outeniqua will be interesting to say the least! With the Friday night at leisure and some great specials at la Cantina, I’m sure you will feel fresh for the second round on the Montagu, followed by a fabulous spit braai on the terrace and some rugby… It doesn’t get much better than this. But it does! As we have a great Just Jinjer concert to look forward to on Sunday afternoon! Get the family and make a plan to be a part of this line-up!

A disappointing weekend for Constantyn and his A-League team who lost to Mossel Bay on Saturday. Bad luck guys and I’m sure you will come back strong this weekend! It was another disappointing weekend for McIlroy, as he failed once again to retain his lead going into the final round of the Malaysian open. Although he did a tad better than at Augusta, it was not a win for him, but for Matteo Manassero, who has not even turned 18 years of age!

Many of us are still beaming with pride after Charl Schwartzel won The Masters last week. Within almost every sport there exists a rivalry between South Africa, New Zealand and Australia (Rugby in particular comes to mind). Here was another one! It was 12:48 a.m. in Schwartzel’s hometown of Johannesberg when he made the last of his four straight birdies to finish off a two-stroke victory over Australians Jason Day and Adam Scott. That covers the Australian part or the rivalry! What about New Zealand? There was no New Zealander in the field!

I follow Gary Player on “Twitter” and he aptly Tweeted: “I am absolutely delighted for Charl and South Africa. Congratulations and very well done to him. That is how you finish like a champion!”

Coming back to the sporting rivalry between the three countries: On receiving the coveted Green Jacket, 50 years to the day, Gary Player became the first non American to do so, Charl left in his wake, Scott and Day, denying them the chance to become the first golfer from Down Under to win The Masters! The Daily Telegraph in Sydney said “Australia has suffered its share of Masters heartbreak, but today will rank with one of the most agonizing. Just as their mutual hero Greg Norman did three times previously, Adam Scott and Jason Day have been relegated to joint second place by another freaky back-nine performance.” That covers the Australian part of the rivalry! What about New Zealand? The best finish in The Masters by a New Zealander? 4th by Frank Nobilo in 1996! One of the best (currently playing) New Zealand golfers, Michael Cambell’s (Winner of The U.S Open in 2005) best finish in The Masters? In 10 attempts ranging between 1996 and 2010, he’s never made the cut!

Enough about how South Africa’s dominating the rivalry in terms of The Masters and golf all together. We’ll move on to rugby. Currently under way is The Super 15 and starting on the 23th of July is the fiercest rivalry of all between the countries… The Tri-Nations! I don’t know of any way of watching rugby other than with friends/acquaintances! So, after you’ve had your own battle amongst each other on the golf course, get settled in the club bar and celebrate together after a win, or berate the Referee after a loss!

See you at the game!
Sheldon Cameron
Supervisor : Golf Operations

Dear Members
Easter is nearly upon us…

We’ve hit that time of year when we all take a deep breath and spend a long weekend with friends and family at Fancourt.
You may have kiddies running through the garden searching for eggs hidden by a random rabbit or be attending a fun Fancourt Easter event on offer. Regardless, we hope the break will be rejuvenating. Have a great (extended) Easter break and above all – travel safe!

Please do not hesitate to contact me for more information.

Have a great golfing week!
Léta 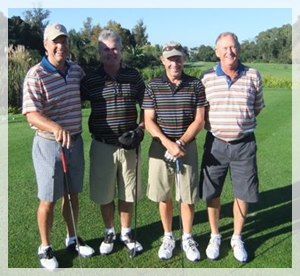 Rob Southey and his 4 Ball 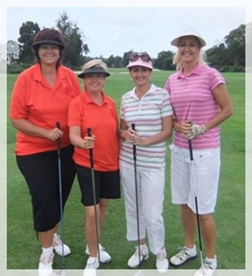 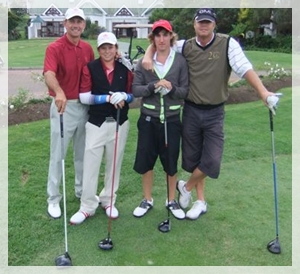 The Watsons in their quest for victory

The Steenburg Group…welcome to Paradise guys!