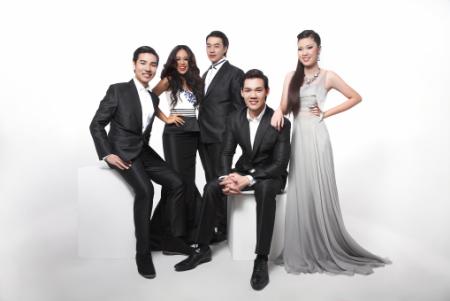 Thailand’s sensational VIVA! offers first-rate musical entertainment at the George Arts Theatre on May 25th 2011 at 7.30pm for one performance only

Pop and opera explode in an entertaining feast of music at the George Arts Theatre  with Thailand’s sensational super voice band VIVA! With One performance only on Wednesday, May 25th 2011 at 7.30pm.

Featuring five singing superstars from Thailand’s first and only pop-opera musical ensemble VIVA!, these classically trained songbirds will have everyone joining them in their selection of traditional, opera and pop classics.

Award-winning South African Producer Colin Law and Musical Arranger and Conductor Mark Cheyne have assembled the cream of Thai talent to produce a fresh and invigorating group of five distinguished voices in perfect harmony that celebrates the joy of music.

The vocalists made their triumphant debut in Bangkok in December 2010 and were also featured in many popular Thai Television Specials, including Star Stage and the star-studded  Pattaya international Film Awards (the equivalent of the Asian Oscars) and headlined this year’s Songkran celebration at the Three Kings Monument in Chiang Mei, Northern Thailand . They will be heading back to Asia to continue their tour , where they will wow their fans with their mystical musical magic. On the 3rd June 2011 they will perform a special performance dedicated to the King Of Thailand’s 84th Birthday celebration. This is a huge honour for these proud young Thais!

These Thai prodigies are taking the pop-opera market by storm with their inspirational and impassioned recital of traditional opera and contemporary pop music.

VIVA! will perform a wonderful variety of eclectic pop and rock classics at the Chiang Mai Festival that includes such as Oceano, 21 Guns, Toreador, Prayer in the Night, You Raise Me Up, Unchained Melody, Libiamo, Adesso and Barcelona, to name a few.

VIVA! will indeed be  the word at the George Arts theatre and guarantees musical entertainment like you have never heard (or seen) before.

For more information on VIVA! and their upcoming performances in South Africa and Asia  visit the website  www.vivapopopera.com