[scroll down for pictures]

It was two days before Christmas and Corne Edwards had slept over at his friend Andre de Goede’s house in George. The family had been driving around looking at the rivers, all of them flowing fast after days of rain. On the way back from Wilderness, Andre asked his Mom if they could hire a canoe at the Kaaimans river crossing. The two fifteen year olds were full of energy and the exercise would do them good.

Andre thought that it would be cool to show his friend the Kaaimans waterfall. It is a place that his family had paddled to often, and he knew it well, but he had never seen it after so much rain.

“ We pulled lifejackets on and were lekker amped. I told Corne about the waterfall and the rocks that we could jump off. But as we rowed out I saw … Jisee the waterfall is a little bigger than it was before,”said Andre.

Because of the heavy rain the flood gates of the dam upstream had been opened and the waterfall, normally quite strong, had been turned into a raging torrent. The lead up to the waterfall is through a narrow and extremely high kloof. It is perhaps 5 metres across and 70 metres high, and only150 metres long, looking much like an old fashioned thermometer.
Where the thermometer narrows, before where the mercury would be held in the ball shape, is where the waterfall comes in on the right hand side.
Under normal conditions it is relatively easy to paddle between the waterfall and the rocks on the left hand side, but on this day, the water crashed all the way across the channel. The sound was enormous, it was impossible to talk and the force of the water falling created its own wind.

Andre realised that they were not going to be able to jump from the rocks as he would have liked to, but he really wanted to show Corne what it looked like on the other side of the waterfall. The big circular shaped pool is beautiful and he was excited to see it in these conditions.

They climbed up onto the rocks opposite to the waterfall and pulled the canoe up after them. They left their shirts and paddles with the canoe and sat watching the water in awe.
“ It was lekker. The waterfall was so strong that we sat for ages on the rock. The spray was like a force that pushed us backwards.
“ I told Corne that we would not be able to get through, so we walked back to the canoe only to find that the current had pulled the canoe in. He grabbed it, but slipped on the rocks and went into the water. I grabbed him and he pulled me in as well. The water was very strong and we were knocked against the rocks and then swept in a circle to the back of the pool on the other side of the waterfall.

“ We thought that it couldn’t be that hard to get out so we tried. We tried quite a few times. Perhaps for two hours. At first we pulled the canoe onto the rocks at the back and tried to swim out, but the current kept pushing us back. And we realised that that would not work.
“So we went back to the rock ledge, took the canoe, stood in it and held onto the rocks, slowly pulling ourselves around. But at the last bit the rocks slope down at an angle… and there was a whirl pool there. It just pulled the canoe from under us, and we fell in the water again, and  got swept around to where we started.
“ We kept trying that for ages before we knew it was not going to work. We had been sitting for a long time when we heard someone calling. It was one of the guys from Eden Adventures. We whistled and called back.
“ The guy showed us that we must stay where we were and thats when we realised that we were in trouble. We didn’t know what was going on on the other side and didn’t know what our parents thought.
“ We waited and waited …  and then through the mist we saw the red colours of the NSRI.”

The sun was getting lower and the boys started to get cold. But their biggest fear was what their parents going to say.

“We really started to get cold. We started shaking, said Andre.”

Wilderness Sea Rescue station commander, Hennie Niehaus, had just got two calls for help – the second one saying that the children were up at the waterfall.

“And that’s when I thought ‘woah here is trouble’. He swung his crew into action. He and crewman Attie … were first on scene and launched the Discovery Rescue Runner at the low water bridge as fast as they could.
“ I had no idea what to expect. And when we got up there I thought whow here is a problem. You could see nothing. I climbed up the rocks and saw that when the sun shone on the mist in there it prevented us seeing anything.
“It was just one thick vapor.
“But as a cloud came over you could faintly see the children on the other side. I saw that they were alright and went back to tell Cliffie and them, who then went to tell the parents that they were ok.

First to be taken across the pool was Andre.

“It was an adrenaline rush. I just hung on the croc and the guys pulled.”

Andre was transferred to the Discovery Rescue Runner and taken out through the gorge.
“By then I was flippen cold”, said Andre.
“When I climbed off the rescue runner I saw that the whole corner of the parking lot was full of people. There were cars everywhere. An ambulance. A 4×4 METRO bussie. They took me to the ambulance and did blood pressure, pulse and things and gave us huge blankets.
My temperature was 34.9 and his was 33.6.
“We were blue.
“Everyone gave us hugs. Corne’s parents were there, my Mom and them were there. Everyone was just glad that we were out and safe.We got goose bumps.

“And I thought, jussee you don’t know what a big thing it is until you are on the other side.

“ It could have ended very differently if it had have been an hour later. Sometimes when I lie awake at night, I think that it could have been the last day that I went for a swim.”

Andre’s mother Lieschen said it took a while to understand what had happened. “In the beginning it was just that they were going for an hours paddle in the canoe, have a quick look at the waterfall and then come back.
“Then you realise after an hour, an hour and a half, that they are not back. People go to look and they can’t find them.
“ And you start to wonder what could have happened.

“The insecurity and powerlessness … its terrible to stand there and all those emotions go through you.
“ And in the end to see the NSRI… they were there to help. They were kind and friendly. It was two days before christmas and this huge team of people came to help.

“And then they gave us our children back. That is unbelievable to experience.
“I am very grateful,” said Lieschen.

Andre turns 16 this year and was so impressed with the crew during his rescue that he intends joining Wilderness NSRI straight after his birthday.

Hypothermia is a medical condition in which the victim’s core body temperature has dropped to significantly below normal and normal metabolism begins to be impaired. This begins to occur when the core temperature drops below 35 degrees Celsius. If body temperature falls below 32 °C, the condition can become critical and eventually fatal. Body temperatures below 27 °C are almost uniformly fatal. 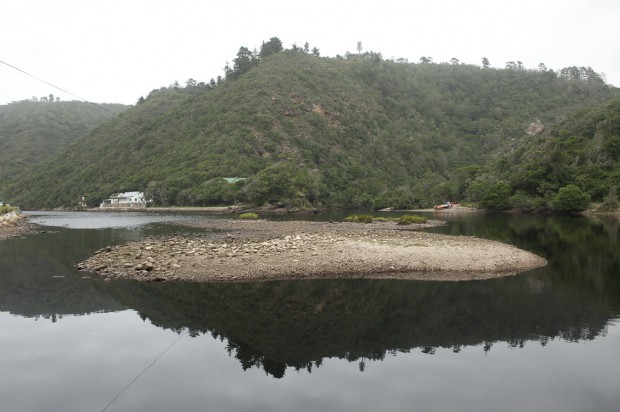 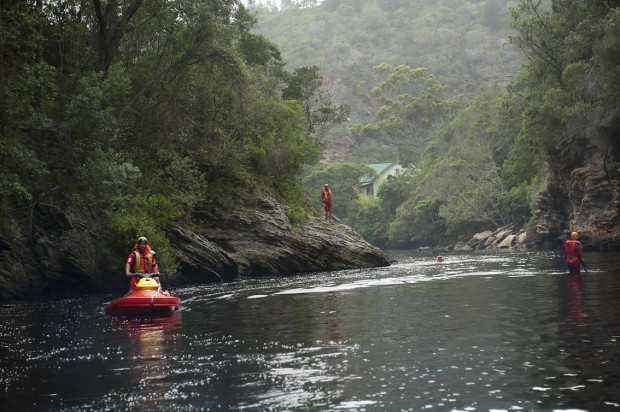 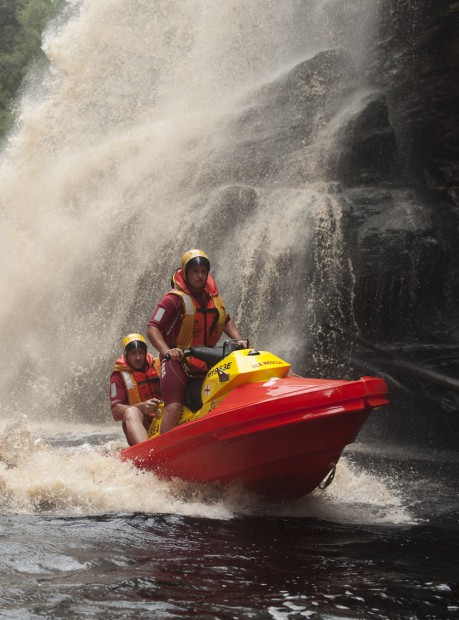 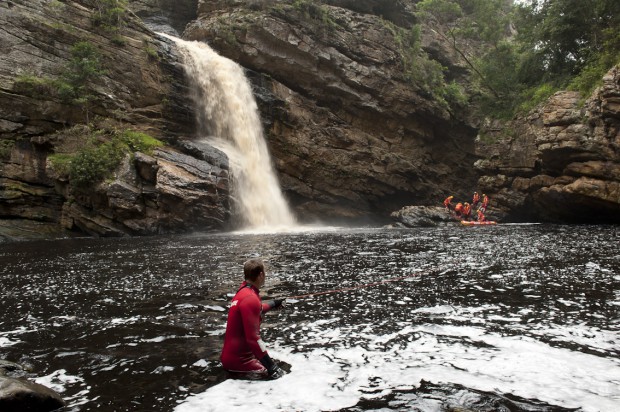 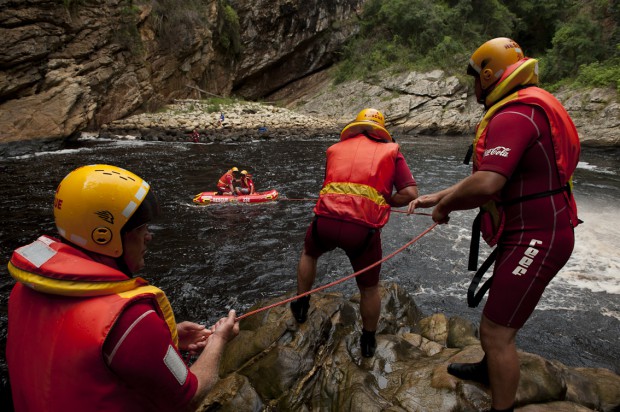 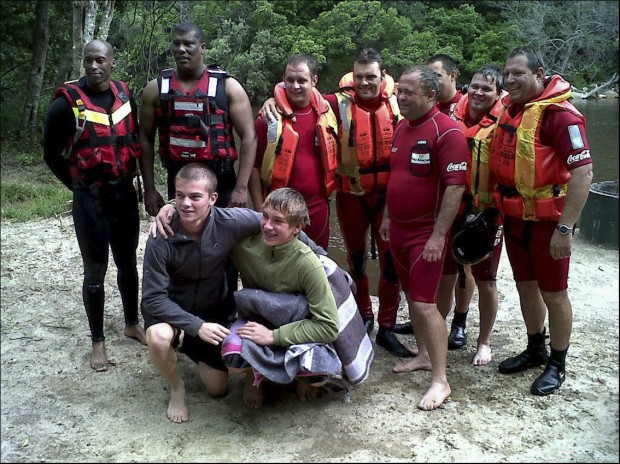 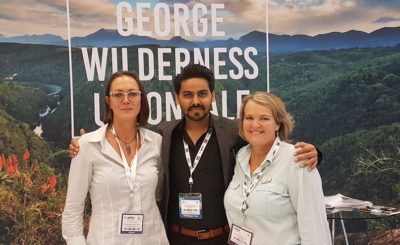