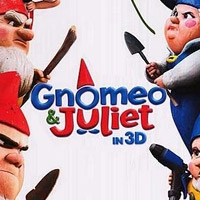 One of the world’s most famous romantic plays is given a comedy rebirth this week with the release of our lead title Gnomeo and Juliet which is presented in digital 3D at participating theatres. As well as that we have a number of other titles that we hope you will enjoy. Ster-Kinekor Theatres – your happy place.

The animated adventure comedy Gnomeo & Juliet 3D is based on William Shakespeare’s play Romeo & Juliet and features the voice talents of James McAvoy and Emily Blunt among others. Two young garden gnomes who live in the back yards of 2 houses next door to each other fall in love despite their families being involved in a long-running argument.

Find us on Facebook and make sure you enter our fun competition to win awesome GNOMEO & JULIET hampers. You’ll have your friends laughing at your genius. And your gnome!

I Am Number 4 is a sci-fi thriller starring Alex Pettyfer as a new teenager in a small town who hides a dark secret.He is hunted by dangerous people who will stop at nothing to see him dead and soon the whole town is involved.

There’s further sci-fi on offer with the dramatic film Never Let Me Go which stars Keira Knightley, Andrew Garfield and Carey Mulligan as kids who attend a private school and who discover a terrible truth about themselves that threatens to change their  lives forever.

The proudly South African production Paradise Stop is the latest film from the team that made White Wedding. The film tells the story of a truck-stop in Limpopo and the characters who live in and around it. The film stars Rapulana Seiphemo and Kenneth Nkosi.

The opera Iphigenie en Tauride is the latest offering from the New York Metropolitan Opera season 2011. It was written by Christoph Willibald von Gluck and tells the story of Agamemnon’s family after the Trojan War.

Girls, join us for Girlfriends’ Getaway on the 30th March 2011 to preview the wonderful romantic drama – No Strings Attached, with Ashton Kutcher and Natalie Portman.