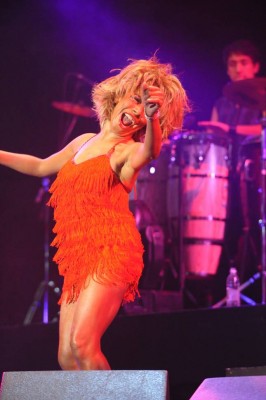 For one show only, Showtime Australia brings to the George Arts Theatre Simply The Best – an energetic tribute to the Queen of Rock ‘n Roll – Tina Turner.

Rebecca O’Connor is simply the best as Tina Turner.  Rebecca first came to international attention as the winner of the prestigious European impersonation competition STARS IN THEIR EYES in 2002, in front of thirty-three million television viewers.

The Irish-born star then returned to her home to focus on her new dynamic project, The Tina Turner Tribute Show Simply The Best, which subsequently toured Europe to great success.  On stage with her full live band, Rebecca O’Connor’s rendition of Tina Turner Classics will leave you breathless.  In the words of Tina Turner herself, “Rebecca is so good, she’s scary.  If I only had her energy today, I’d still be touring!”

Based on Tina Turner’s live concerts Simply The Best  features a full band (many of the musicians are South African), a fantastic lighting show and with Rebecca O’Connor bringing to the stage all the excitement and energy of one of the world’s most popular entertainers.