Comedy at Kalahari Theatre Restaurant and Theatre in George 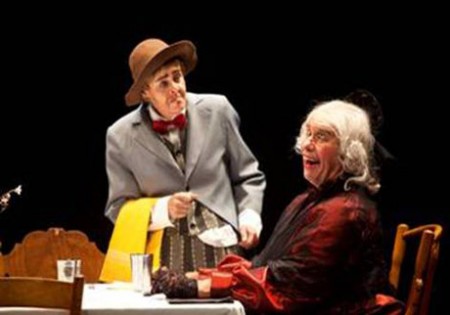 Most of us have seen   ‘Dinner for One’ (also known as “The 90th Birthday”) traditionally shown on TV on New Year’s Eve and which has became a cult movie in Germany after it had been filmed in Hamburg in 1963.This slapstick comedy sketch takes place in an ancient English mansion, where the last remaining member of the family, Miss Sophie, is celebrating her 90th birthday. The entire sketch takes place in the dining room, with Miss Sophie (Elize Cawood) at the head of the table with places laid for her ‘guests’- whom she has outlived.Come and experience this classic as well as its spoof at the Kalahari Restaurant and Theatre in George on Friday and Saturday 11 and 12 March at 21:00. Watch the butler, James (Wilson Dunster), serving a four course meal to all the guests, as well as a different alcoholic beverage for each course. As none of the guests are actually there in person, Miss Sophie insists that James drinks the toasts as the four different characters… ”Same procedure as every year, James” James becomes more and more inebriated…. The tension is increased by a tiger skin rug, the head of which he has to negotiate on every trip from the sideboard to the table. And then … the sequel:   Dinner for One Too… In the second version (or spoof) of ‘Dinner for One’   the roles have been reversed:   Wilson plays Miss Sophie and  Elize plays the butler, James, without turning it into a ‘Drag-show’. It has also been South Africanise  and the classic version is so well-known, the audience knows exactly what to expect, but with Dinner for One Too…  it has been toyed with somewhat and some liberties have been taken! The reversal of the roles – Elize  portraying James, the ‘plaasjapie’ and Wilson  playing the ‘English Lady’ – in itself demanded a constant re-think and re-evalution of the characterisations. With the virtuoso talents of both Elize and Wilson a  new, fresh and credible spoof that could be as popular as the original has been created. Tickets at R120 available from Computicket and from the Kalahari Theatre at 044 874 5000