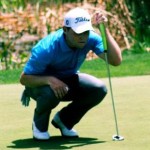 Branden Grace was on the receiving end of some family support ahead of the Telkom PGA Championship to be played on the Woodmead course at Country Club Johannesburg starting on Thursday.

Defending champion Michiel Bothma is his cousin, and, when running through potential winners of the 2011 title, Grace’s name was very carefully added to a list of players who have been showing great form both locally and internationally.

“He played this event as an amateur,” said Bothma, “and he finished very high up.”

Grace was indeed a controversial amateur addition to the field in 2007 when Louis Oosthuizen won the first of his two consecutive titles, and he opened his campaign with an eye-popping seven-under-par 65 to share second with Andrew McLardy, one stroke behind first-round leader Desvonde Botes.

He held his game together with maturity that belied his 19 years at the time, carding 68-70-71 for the remaining three rounds and ended up sharing 14th with Hennie Otto.

Otto was another name mentioned by Bothma as being a contender for the title: “He’s just come off a fantastic win at Fancourt in the Dimension Data Pro-Am,” he said.

“And James Kingston has had a couple of second-place finishes over the last few weeks, one on the Sunshine Tour and one on the European Tour — so he’s in good shape,” he added.

A player who Bothma singled out as being really ready for a win was Thomas Aiken. “I’m sure he must be a favourite, just so he can have a haircut,” laughed Bothma.

Aiken has vowed not to cut his hair until he wins a tournament. “I’m sure that’s why he came over to South Africa from Europe for this tournament and last week’s,” said Bothma.

But cousin Grace was in a share of fourth in the Dimension Data Pro-Am last week, and has been looking like contending in every tournament since his maiden professional victory in last October’s Coca-Cola Championship.

He’s had another top 10 with his share of eighth in the Africa Open, and a further two top 14 finishes in the Joburg Open and the Africom Zimbabwe Open.

“He’s been in good form lately, so he’s got a good chance,” said Bothma.