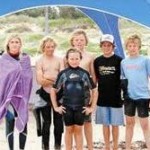 Surfersvillage Global Surf News, 15 February, 2011 : – – The Board of Directors of Surfing South Africa has ratified the 2011 SA Junior Surfing Team which will compete in the 2010 Quiksilver ISA World Junior Championships in Peru from May 21 to 29, 2011. The team was chosen after competing in two grueling trials at Cape St Francis in December last year and in the first week of February.

Although there are four new caps in the side there is plenty of experience in all three divisions. The SA team also includes Kommetjie brothers David and Benji Brand who are the second set of siblings to be included in the national junior team in the last five years. David Van Zyl of Central KZN, the standout surfer in the Reunion Challenge in October 2010, is the newcomer in the U18 Boys group which includes 2010 SA Under 17 champion Michael February, fellow Western Province surfer David Brand and Steven Sawyer of Eastern Province.

Both February and Brand will earn their fourth caps while Sawyer earns his second cap after representing South Africa in the Under 16 division last year. Jarred Veldhuis of Western Province is the official non-travelling reserve in this division.

2010 SA Champion and ISA World Junior Championships finalist in 2010,Sarah Baum of Central KZN, and Bianca Buitendag of Eastern Province, who just a month ago won an international contest in Australia, will earn their fourth caps as members of the Under 18 Girls. Two new caps, 2010 SA Junior Invitation team members Emma Smith of Eastern Province and Nikita Kekana of Central KZN, will make their debut for the SA Juniors in Peru. Roxy Giles of Southern Cape is the official non-traveling reserve.

Surfing South Africa President Mark Hoffman has been appointed team manager with Theo Van Wyk the assistant manager. The coaches are Quintin Jones and Llewellyn Whittaker. The team will be involved in several training camps before departing for Punta Hermosa, near Lima, Peru in mid-May.

As a final preparation to the tournament the South Africans will defend the Lotto SANZ Trophy in the traditional SANZ Challenge against New Zealand at Punta Hermosa two days before the World Championships gets under way. The ninth edition of this friendly encounter sees the two teams competing for a unique trophy made from semi precious New Zealand stone and South African yellow wood. The trophy was first presented in Durban in 2003 and is currently held by South Africa.

The 2011 South African Team training camps and attendance at the ISA World Junior Championships is supported by the National Lottery Distribution Trust Fund.